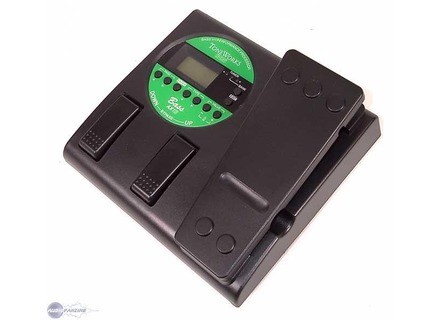 View other reviews for this product:
I bought this multi effects pedal from frets & keys in chesterfield, england. Originally the unit was priced at £120 but this one was reduced to £100 as it had been used for demonstrations.

The wide range of effects i very useful for someone who is not looking for any particular sounds, but just wants to experiment. The in built tuner and metronome add an extra incentive to buying it. The ability to edit and create your own personnal effects is superb, and i have spent long period of time tweaking everything to my taste.

The large pedal used for wah-wah effects is very difficult to switch on and off as it is not spring loaded. A better set-up would be to have one pedal for volume and one for wah-wah effects. The quality of the effects arnt as good as if you buy the pedals individually, but that is to be expected.

Heavy duty platic with steel bottom. I have kicked it and stamped on it during thrash songs and its still in perfect condition.

If you want to try lots of effects, but have a budget, this is the pedal for you. All of the effects sound good, and the edit function is great. Wah-wah pedal isnt much use though, but this the other features make up for it. If your looking for your first pedal, look no further.