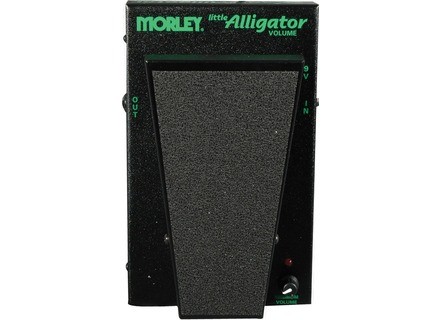 Buy this productView price information >
View other reviews for this product:
The Morley little alligator is an optical controlled volume pedal. Most volume pedals operate with s volume pot similar to the one on your guitar with a string attached to the foot treadle. There is no internal potentiometer or string to wear out inside this pedal. It has standard 1/4" input and out put jacks, 9 volt DC jack, bottom battery compartment, and a knob for minimum volume when in heel down position.

This is as simple as it gets in the pedal world. I do not think I even ever opened the manual when I bought it.

I have used this both in front of my amp as well as in the effects loop with similar results. Many people complain about volume pedals sucking high end and fullness from their signal but I do not notice any of that with the Morley. It seems to preserve your tone even when dialing down the volume and I like it much better than using the guitar's volume control as that normally kills your high end. In the effects loop this pedal works great as a control for lead boosts. The minimum volume knob allows you to have the pedal all the way back in the heel down position for your main volume and then kick it up during solos. I like that much better than an abrupt volume change using some amps solo boosts. Using it in the effects loop also allows you to swell in distorted tones without reducing the amount gain.

I think this is one of the better volume pedals out there. I have tried the large Ernie ball pedals and they seem to roll off some high end. It is not really noticeable in the amp's effects loop but I use the volume pedal in different ways depending on the gig. I also prefer the optical set-up as opposed to the string in the Ernie ball. I have seen those things break on people in the middle of a gig and it's not something that can be fixed with a quickness. I have owned this pedal for many years now and not had one hang up with it.
Did you find this review helpful?yesno
Cookies help us improve performance, enhance user experience and deliver our services. By using our services, you agree to our use of cookies. Find out more.