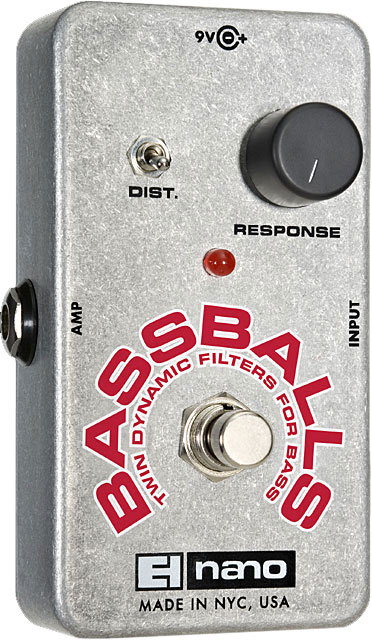 View other reviews for this product:
Mister H-Pi
Publié le 10/15/09 à 02:33
see another view, or technical specifications on the site of EH.

The setup is super simple, there is no doubt, but just a little too much. it is mainly the outer chain that will allow you to customize your sound. (Your bass and effects before and after bassballs and the EQ to your preamp).

So yes, it's a cool effect, it's funky death, but I'll put a big flat!
I fell for this store, (I played a warwick corvette 4 string, and an amp markbass). Régalade really big. good, so, I cracked a little later, I bought one on a site online to complete an order and not one I tried. (Which may be the theory that they are not regulated the same).

and there ... warwick corvette connected to my 6 strings and my Hughes & Kettner, big disappointment: 2 things, the effect already badly enough cash so bad, and cut much bass. and another thing, he likes not at all the big gains entry, it crushes everything. so basically, there is a very good effect, if I leave my bass passive, but active .... cracra ....
and this is where it's a shame there is only one volume pot ... he really had an input level, output level and also because when you activate the switch with a large distortion sensitivity of the effect, its super funky Bootsy the grotty, but it was a big difference in gain and it's a bit annoying to not be able to settle on the same pedal.
good that said, I'll see if editing the potentiometers inside the pedal, I can not make it sound a little better my stuff!

good it is, it's still a good pedal.

I tried it in store
and here I have one last 5 days on my config.
what I like most is that little side autowah which changes depending on the attack, the look of the pedal and the simplicity

I like it: it is the lack of editing is possible in terms of output level, input gain, and it cuts a bit too low.

Value for money: 64 euros .. I find it quite expensive for something you can not edit more.
with experience ... I would go directly tested the effect in question on my bass (which is what I am also in general). and I would buy one I tried, not another.
00