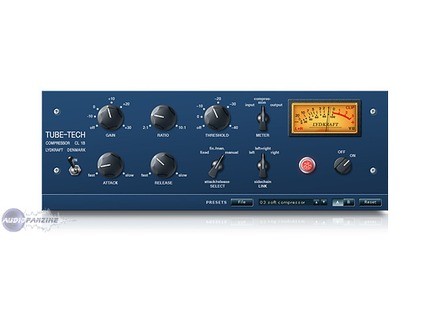 The CL 1B plug-in is based upon component emulation technology, and brings the sound of the CL 1B compressor/limiter to Digidesign® Pro Tools|HD, HD Accel and VENUE systems. The plug-in retails at EUR 740 excl. VAT.

The CL 1B plug-in offers up to 30 dB of gain and a variable step-less ratio ranging from 2:1 to 10:1. It features attack/release controls, with three different settings, enabling the CL 1B to be used as an insert or bus compressor.

The Sidechain/Link button in the stereo instance of the CL 1B plug-in recreates the dynamic master/slave relationship between the left and right channels, a feature usually found when having two mono units interconnected via the Sidechain Bus found on the hardware version of CL 1B. As a unique feature, users can set whether the control of the compression is to be fixed at either left or right .

One capability that is unique to the CL 1B plug-in is the advanced metering, which can display the left channel, the right channel or both channels.

For more information, visit their web site at www.tcelectronic.com.