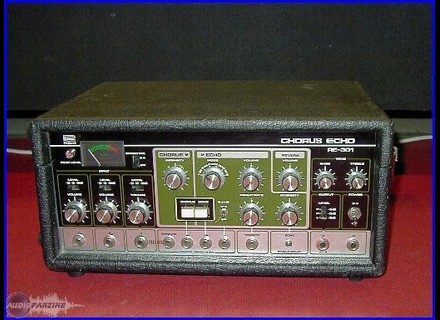 RE-301 Chorus Echo, Delay / Echo from Roland in the RE series.

View other reviews for this product:
- What are the effects or types of effects available?

a good metal spring reverb, a chorus, a sampler mode (sound on sound) and of course a delay: with 6 different modes, can single delay, speed, intensity and volume. Two buttons tone serious and acute.
- What technology is used? (Analog, digital, tube ...)

It&#39;s fully analog of course. It&#39;s a bit old electronics (30-35 years ..) but of excellent quality, the top anything. The reverb is created by the audio signal to bypass the spring, I have often read that it was not the best, she is personal even if it&#39;s true that there is little control and its not really a modifiable (Ormis intensity and tones), but honestly the sound is already very satisfactory and allows many spatialized or worse (I dub roots with it and it sounds clear).

6 heads read / write / erase three dedicated to reading delays as follows: Mode 1, 2 and 3 respectively corresponding to the heads 1, 2, 3, 4 heads a mode 2, mode 5 and 2 +3 heads mode 6 1 +2 +3 heads. The different modes do not correspond simply to different delays, each has a sound all its own. Some modes are extremely sensitive to the intensity that exceeded half runaway and gives feedback to this so special ... The button "repeat rate" (speed variation) is particularly effective in addressing delays in millimeters or just change modes, depending on their speed they can be very different. There really is something to have fun.

The chorus is very nice, but I&#39;m not Friant of this effect at the base. Intensity of a single button, which allows well qualified. The sound comes from a slight flanger, and immediately found some sound, like "Come As You Are" ..

Not test the sound-on-sound, because it is disconnected. A priori this sample from 10 to 45 no more no less.
- Connections?

Master: severe acute tones plus two twin output jack (as is used in mono / stereo amp on a table or a mix)

Ultra simple. You turn the knobs and it works. Instinctive very simple operation. Quick and fun.

The manual is clear.

Effective? It&#39;s the least we can say! Realistic? The echoes are really all depends on the use of tones and sound sought (or found

I use it for the dub so, piano, guitar, drums mainly.

I love feedback and I really like reverb. I was pleasantly surprised by the chorus. Am far from having exploited yet but I&#39;m curious and I use from time to time.

Over the past year. What I like most: the overall quality of this stuff (made in Japan ..), and the rendering of the sound is amazing. It may well be warned, it&#39;s radical. Since I, the debate digital / analog is finished for me. Before I was convinced it was better than analogue and everything, and everything. Now I am completely in love with this material is the goldsmithing mail. Skip nimporte what&#39;s in it, without effect, it appears best!

The characteristic I like most, versatility, combines several effects that blend perfectly. The less I am very nervous for her health is fragile, however. They age. Mine is a shot but we feel that we must be careful. Initially when I recovered it had some phases or she was racing to start, the engine was stuck at the max. And then she would not return to normal too. I was patient, after a month or two it usually ends up not depart from nothing. At the same time we must especially worry when it&#39;s hard to turn. Mine fired up! Pay attention to demagnetize the heads from time to time. Keep as much as possible in a protective frame, does not like dust or smoke. Provide Replacement Strips (attention to their quality). Beware of unscrupulous repairman (I speak knowingly).

I have tried no other model for now, but is it really necessary at this time? I still have time.

The value for money? Nickel for me. I got a € 370 and it&#39;s fine with me saw it in excellent condition, little wear because very little used. After it is according to each machine, always the same for the occasion. I was not really the 201 most highly sought-old, used very, very expensive, less impact. The 501 drew me well but like the price goes live, must rely heavily 500-600 ..

I would do this choice of course! Maybe in time I will seek a second to vary the reverb fun. with its old-fashioned but also a little different. But frankly it&#39;s not on the agenda and there is so much that I would have before .. I am already well filled.
See the source
Did you find this review helpful?yesno
Cookies help us improve performance, enhance user experience and deliver our services. By using our services, you agree to our use of cookies. Find out more.