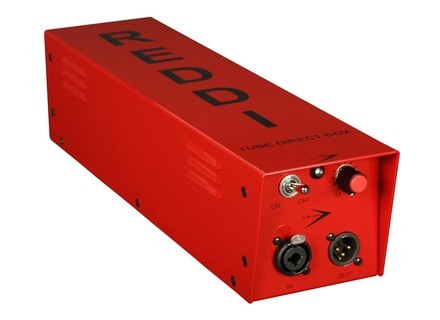 View other reviews for this product:
A-Designs' REDDI is an awesome tube direct input box. I don't know all the specific information about it's insides, but it does have two 6N1P tubes in it. The box takes power using a standard power cord and has a combo 1/4"/XLR input, and XLR output, and a separate 1/4" through put. It isn't rack mountable as it stands as it's own portable box.

It's not at all hard to operate the A-Designs REDDI. Once you've made your connections, there's just a leveling knob for setting your volume, which is cool as you won't usually find any volume control on DI boxes. This sets REDDI apart and puts it in more of a high end DI/preamp category rather than your standard DI box. The only other real control it has is a ground switch. The manual isn't something that should be necessary...

The sounds of the A-Designs REDDI undoubtedly makes it one of, if not the best sounding DI box I've used to date. I've only used it a few times to record bass, and it was the first time that I really preferred the DI sound to that of the amp we recorded along side of it. It's incredibly full sounding for a DI box that does more than just reproduce your sound faithfully as it adds a certain presence that isn't normally found in a DI sound and that needs to be captured using a DI. Next time I use REDDI I'd be perfectly happy not taking an amp sound at all if I'm recording bass, as the sound of this DI alone makes for a great bass tone...

The A-Designs REDDI is one of the best modern tube DI boxes around and is up there with the best that I've ever used. Add it to your recording studio and it's a one stop shop for recording direct. While I've only used it for recording bass, which seems to be what it's best for, it will certainly work well for recording anything else direct like keyboards and things like that. Having said this, I'd only get it if you're going to record bass with it primarily and maybe other things here and there as it's expensive for sure. A simpler Di box will do the job for keyboards, but REDDI is just about the best there is for bass guitar...
Did you find this review helpful?yesno