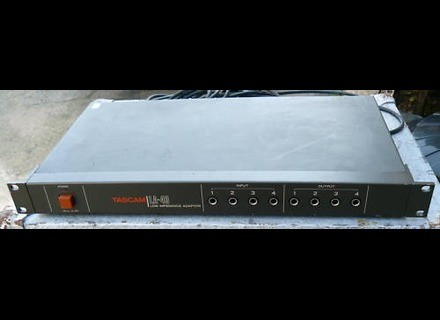 Product replaced by the Tascam LA-40mkII.

Value For Money : Poor
View other reviews for this product:
This device is not a box of live. It's just a symmtriseur - dsymtriseur 4 signal channels. Because a beast of direct, in addition to a signal symmtriser, gnral has other functions: in some cases eliminate the snoring of a ground loop, reduce the sensitivity reverse phase, a copy of the signal to another device such as a guitar amp on scne for example, and on some models, apply a high pass filter or low pass. Additionally, entries assymtriques of a box of live is still sometimes a jack with XLR assymtrique. Handed that Tascam LA-40 and am just a more, are on the conection assymtrique cinch instead of jack. And finally, gnral, a box of live dsymtrise does not signal, do nothing to symtriser: a wrong in one direction while on the Tascam, two-way effort ^_________^

Also, what is rvolutionnaire this device is that all taken from the TRS jacks that these are forward, are the rear of the aircraft and I can You say that in certain situations, such as when you have to put the camera on a tape recorder is almost relentless. Because I know of no direct beast of a classic all the rear connections. Indeed, these have dernires gnral between the rear of course but the XLR signal symmtris the front of the camera or vice versa.

I had intended to dpart the Tascam LA-40 tape recorder for my Otari MX-5050BQII symmtriser for the XLR assymtriques latter using adapters XLR => cinch. But I do not know why, was not working with this Otari: no sound going on. Well, I do not think that comes from a LA-40 as this make me the same shot with the beasts of the classical direct.

The LA-40 is perfect, however when it comes to any symmtriser recorder or other device Hi-Fi show when it comes to the latter on scne for one reason or another, for example. Or another example, it can be used to make the symtriques O cinch (so assymtriques) of 4-track tape recorder clbre Tascam 42 for which this device has t visibly Designed as an accessory to departure.

I have since I have my Otari MX-5050BQII is - say the last few months, and I do not regret my purchase. Well, nine is a bit expensive for what it is (it's almost the same price as a BSS AR-416! - Luckily I bought used nearly 4x less expensive!) but in some situation, having all the rear connectors is relentless.

Malhère this Tascam LA-40 is no longer manufactured (and its successor Tascam LA-40 MKII for that matter): mine, I d buy it used and it is relatively hard to find opportunities.

On the MKII the TRS jacks, the front of the camera, ts have be replaced by screws SETTING THE gain. In addition, on the latter, it is possible simply by slecteur on each channel and a main slecteur eliminate the ground loop hum, more non ngligeable.

This device (and the MKII) is virtually without competition. Indeed, I know of no other manufacturer who offers. The other competitors offer plutt real beasts of direct symtriser the signal - some of them exist even in the rack 4, 6 or 8 channels.
See the source
Did you find this review helpful?yesno
Cookies help us improve performance, enhance user experience and deliver our services. By using our services, you agree to our use of cookies. Find out more.