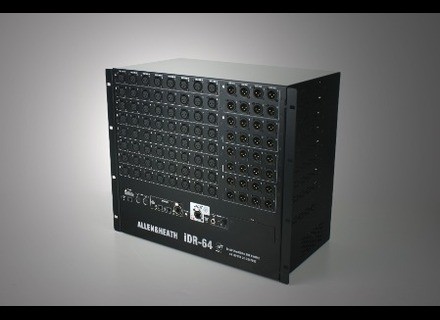 iDR-64, Digital Mixer from Allen & Heath in the iDR series.

The new iDR-64 comprises 64 mic/line inputs and 32 XLR outputs in a 9U frame, and features the iLive 64x32 RackExtra DSP mix engine, providing processing (dynamics, EQ and delay) for all 64 channels and 32 mixes.

The RackFX DSP framework provides 8 stereo processors capable of FX emulation of industry classics. Each Rack has flexible I/O routing with EQ and Dynamik FXShaper on every dedicated return.

With the addition of the iDR-64, the iLive Series now includes a total of 6 MixRack and 7 Control Surface variants, which can be mixed and matched in any combination, and share the same firmware, so that show files are transferable between systems via a USB key.

Using standard Ethernet, the iDR-64 can be controlled with one of the iLive Control Surfaces, ranging from the rackmount iLive-R72 to the iLive-176. Allen & Heath's proprietary ACE (Audio Control Ethernet) link is provided to link the rack to a control surface, allowing cost effective long distance point to point control and audio communication over a single CAT5 cable up to 120m in length.

iDR-64 also has a built-in network switch and MIDI ports allowing remote control using laptops, touch tablets, MIDI devices, and connection for Allen & Heath's PL Series of controllers. The iLive Editor software is a JAVA-based program that enables both offline set up and online real time operation of the system with or without a Surface connected.

There is a Port B option slot for further audio networking possibilities - such as system expansion, digital mic splitting and multi-track recording - via plug-in cards for various interfaces, including EtherSound, MADI, ADAT and Aviom(tm).

To coincide with the availability of the iDR-64, iLive Firmware and Editor software version 1.7 will also be released, supporting the iDR-64 MixRack, as well as the new Dante and Rocknet audio networking cards, which join the ACE, EtherSound, MADI and MMO options currently available. The software will also provide support for an iPhone app.

Check out www.ilive-digital.com for more details.