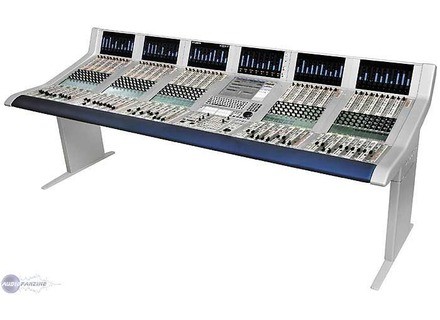 <a title="STUDER" href="http://www.audiopole.fr/fr/index2.php?goto=fiche_marque&marque_id=35"></a>
With its Vistonics control interface, the VISTA has revolutionized the world of digital consoles. This patented technology allows easy control of the parameters of a digital console using a potentiometer grafted directly onto a screen. This will display directly below the function thereof, whether adjustment of level, frequency, time, or ratio, for example.
The sound engineer did not think about using the console and can concentrate on the sound and mixing.
Per tray of 10 faders, 40 knobs are grafted on a touch screen, which in its lower part shows three graphs: EQ, dynamic section and pan-pot multi-channel. Simply pressing one of three zones to assign knobs to the desired settings with the screen display settings. This system, combined with exceptional audio features and has been even more successful consoles VISTA (over 180 consoles sold!).
Common features 3 models:
• Control Vistonics ™: 40 knobs and 40 buttons built directly into a flat touch screen (1 screen available on each tray of 10 channels)
• Managing a large number of parameters (EQ curve, curve of the dynamic section, positioning the pan pot, routing entry) while maintaining excellent visibility,
• Color coded by function audio
• Dedicated keys "Copy / Paste" functions for each audio
• Smart Logic functions, the console detects and recognizes how the button is selected and responds accordingly,
• DSP running at 48 or 96 kHz. Quantifying internal 40-bit
• Grid / O avoids the installation of an external router
• Configuration of 20 to 70 faders.

VISTA 8
The most versatile consoles VISTA is characterized by an outer screen for the installation of a maximum of faders on the surface. It is perfect for use in bus or video control, post-production or mixing with its automation, but also sound and theater.
In this area, it equips prestigious venues such as La Scala in Milan, the great Theatre of Beijing, the Royal Opera House in London, the Copenhagen Opera House or the Theatre de la Ville in Paris.

VISTA 7
The VISTA 7 is rather intended to use post-production through its dynamic integrated automation particularly accomplished.

VISTA 6
Without automation, VISTA 6 is intended rather to use live broadcast, TV or Radio.

Certainly one of the simplest broadcast consoles to operate.

Intuitive is the word that immediately comes to mind. All functions are immediately accessible works in the duo is a pleasure.

The patch is a presentation of "rustic" but so visual. The presentation in the form of a table in which one performs the intersections between input and output is very clear. Moreover, it immediately displays the status of the grid since it shows almost all of the grid on one screen without going through a series of menu as in SSL.

The development of the area is limitless and easy setup via the function strip. By simple drag and drop or copy paste virtual slices are positioned where you want on the surface.

The system Vistronics with knobs that go through a touch screen is revolutionary. And handling and visual inspection is still easier than on an analog console ... a button function.

Regarding the manual ... I do not know how it looks.

Of course everything is not "pink" ... but the functions of a console are really usable without having more than 20 minutes of explanation .... whereas in the competition a button pre-post fader auxiliaries is only available in the menus of the console!

The Windows environment although there are no major problems

The abscence of real macro command programming simplified. For example: open a knob which causes the closure of another volume pot. Mute a slice through a GPI external control without having to unpack the Windows notepad to program a file. Ini

But this is nothing if the config was basic thinking upstream.

This tool has a real easy job as all previous products Studer.

Nothing to say is a thread right ... it certainly is not a console with a "sound". That right, it&#39;s reliable and it is mainly thought for the trade of live TV or radio where you have to go fast.

Since its introduction in the market.

Although it&#39;s expensive but not that much ... Carlrec see.
See the source
Did you find this review helpful?yesno
Cookies help us improve performance, enhance user experience and deliver our services. By using our services, you agree to our use of cookies. Find out more.