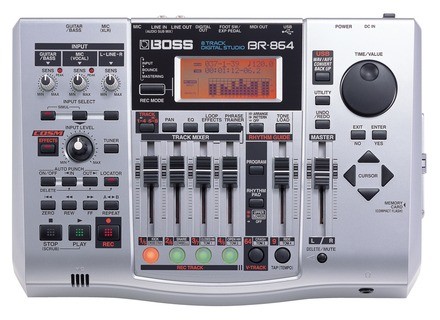 View other reviews for this product:
I picked up the 864 at Guitar Center for $599. I always dug roland products.

I thought the sleek design was "Boss". It was loaded with features but they were a breeze to use. I laid down some tracks added effects, mixed it then dumped it on to my pc to burn it to disc. The quality was unreal! This unit was portable and it rocked!

The only thimg I didn't like was the fact I wished I had it sooner.

The 864 is built rugged and durable. Everything worked like a charm. It took some hard bumps like a trooper.

I would reccomend the Boss 864 to anyone. It was simple to operate even though it had features of a $2000 unit. It was worth every penny.