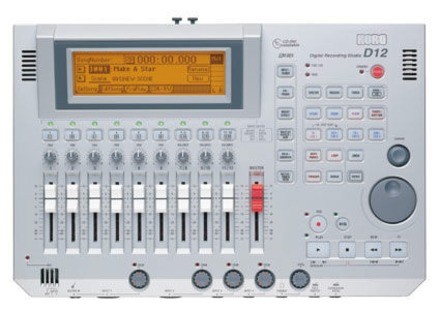 View other reviews for this product:
I bought the D12 because I like Korg stuff (X5 keyboard) and it had 12 tracks for the same price as most digital 8-tracks. I paid $850 at Portland Music Co.

I like what everybody else likes about any digital recording unit. Its digital. It has a ton of virtual tracks and the effects unit is good. ie, preprogrammed parametrics that boost/cut highs/mids/lows, compression, reverb etc. I'm not incredibly interested in learning proper frequency values and such. I just sometimes want to cut or boost ranges. Its easy with the Korg. I also bought a Yamaha CD-burner for it and it hooked up instantly. It also has a cheap little mic built in for using it as an "Oh crap I just wrote a good song/riff and I don't want to forget it" recorder. Cleaning up tracks and copying/moving tracks is pretty easy, as well.

Phantom power might of been nice. The trim knobs are a little sensitive but I think this is a problem for mine alone. They jump up in volume(?) at small twists of the knob. ie, "touchy". The "undo" function works well but confuses me sometimes. I have to listen to the track to see if "undo" actually happened.

It seems a little "wimpy" as far as construction. The yamahas and rolands feel real. This feels like a toy - a damn fun one, though.

I would absolutely by this again because I think it records as well as others and it is often a little cheaper. Sounds I get are usually pretty warm and and I don't have too many nice extra gadgets. Just a condenser mic, a nice acoustic guitar and a pod line 6. My bass is an old bitty and my electric was made by my brother. So, I am really happy with this thing.