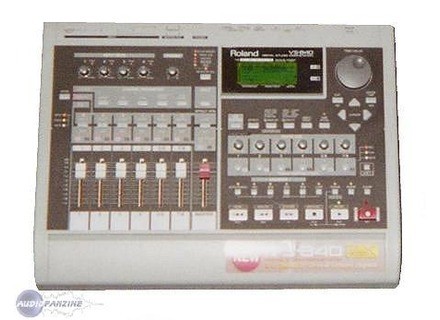 VS-840, Digital Multrack-studio from Roland in the VS series.

View other reviews for this product:
I bought this portable studio workshop from McMurray's Music in St.Louis because I was starting to get tired of the limitations of single-track recording on crappy, improvised gear. I paid approximately 1,000 dollars for it new.

It is amazing to think about all of the things this digital studio can do for a thousand bucks! Thanks to affordable digital technology, a band can use a relatively affordable piece of equipment to record songs with remarkable quality. With the Roland VS840, you have the flexibility of multi-track recording, complete with four "simultaneous" inputs as well as a built-in guitar preamp, onboard effects library, onboard graphic eq., 8 tracks, up to 64 "virtual" tracks, working faders, and every form of output connection they could think of. This unit can be plugged into a PC, any stereo with RCA inputs, or directly to a CD burner.

The simultaneous inputs allow for live recording, if desired, although you have to be creative on how you use each of the jacks. I've found that routing drum mics into an old PA head allows me to only use one track for all of the drums. This leaves a vocal mic, guitar mic, and bass mic open. If you run out of inputs for your performance, there are 4 more tracks available for overdubbing backing vocals, keyboards, extra guitars, etc. Effects can be attached either during the recording process (track by track) or during the mixing phase.

Mixing your recordings to tape (or CD) is extremely easy on this unit. You have full control of each track's level through the use of faders, as well as individual control over effects volume (per track) and panning.

Because the unit is digital, you can re-record parts of a song very easily until you get it right. If you only need to fix a small part of a solo, you can dial up the right part of the track and fire away. If you don't want to throw away an old attempt, just use one of the 8 virtual tracks available. The tracks can be started, stopped, moved forward or backwards with the ease of a CD player.

The Roland VS840 records the tracks on a 250MB ZIP drive. Be aware that 100MB ZIP disks and be used for duplicating songs (from one unit to another), but cannot be used for the actual process of recording. With all of the virtual tracks, each song can take up a large chunk of memory. A 250MB disk can effectively hold about 8-10 minutes of music. The nice thing is that, when you're done, you can always erase the disk and put new songs on top of the old ones. This is good because those disks aren't cheap.

Some of the controls are a little too small for comfort. Lots of tiny knobs. The arrays of flashing lights can be a bit intimidating at first, but Roland does a great job of making it easy for beginners. Even though there is a LOT that this little puppy can do, it is possible to make great recordings using pre-sets and a user-friendly manual. I was able to record a 6 track song complete with overdubs within a day of purchasing the studio. Very easy to learn.

The disks don't hold enough memory for me, and you can easily find yourself in the middle of a song and suddenly have the "Disk Full!" message appear out of nowhere. This can be frustrating. That's why I stick to only two songs per disk if they have very many tracks on them.

The onboard effects are of mixed quality. The guitar effects are on the cheesey-metal-cheese-whiz side of the spectrum. Lots of reverb built into the distortion effects, and not enough body if you have good amps to work with. For distortion, particularly if you have a good amp, I wouldn't bother with the onboard effects. The reverb options, however, are wonderful and very flexible. Everything from large-arena emulation to small room and everything in between.

A nice, sturdy, compact design. The unit seems very tough considering its sophistication. I've hauled it around quite a bit and I've never had a problem.

For anybody serious about making quality home recordings, this is a wonderful piece of equipment to have. Not only does it allow you to record your performances, but it also aids in the composition of songs. With common-sense recording techniques and a little research, I've been able to make recordings that have fooled non-professionals into thinking that they are store-bought. Of course, the recordings are only as good as your weakest microphone.