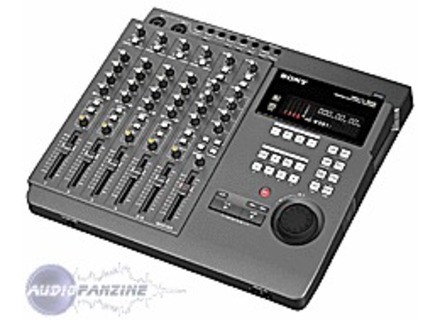 View other reviews for this product:
CHARACTERISTICS any fact sufficient (the era of its release, and still today) to make small models pr-in audio. MD Support is sometimes a bit flaky (can not edit portions of less than 4 seconds, the precision of a second 30me only) for models of music or electro ncessitant great precision, but should trs good acoustics.
There is an undo function and a rehearsal on most edits, but the machine rcrit disk, which can take time, and ncssite have enough room in rab disk. Especially knowing that the MD data are only 37 minutes of capacity, but by buying 2 or 3 ® data and safeguarding the mix ends with an external support, we're not caught short.
Single large default of the machine: no input and output numrique.

Simple to use and intuitive trs.
The screen is readable trs (except with a pointed top projo!) And prompts the abrviations said do not disturb the beginners.
Manual manipulated adj dispensable for whom this type of recorder, and clear to the novice.

I used the console for some qq years to mix my keyboards and a small band to play in bar (4 mono tracks + 1 Stereo - 2 shipments of Fx, can act as a circuit return) .

All converters is honest (again, for this type of hardware and for use of maqutage).
No internal Fx, we can regret it. But the console allows two circuits for shipments outside of Fx.

I use it for 7 years, 5 of which extensively as a model and recorder for small mixing console. The first signs of weakness just appeared just this year: 1 x Stereo somewhat tired and 2 buttons that support evil. Everything else is ok: the connection is impccable, faders still rolling, the knobs have all been normal wear.

In the era of its release, c'tait the top in this price range. The MDM-X4 (Mk2 for me) was a better design than its competitor the Yamaha MD-4, silent and less expensive than the Tascam. I do it again this choice without hsiter.

I pass the IT solution since, but I still use my MDM-X4 trs often quick to back the Ides of composed on my keyboard.
See the source
Did you find this review helpful?yesno
Cookies help us improve performance, enhance user experience and deliver our services. By using our services, you agree to our use of cookies. Find out more.