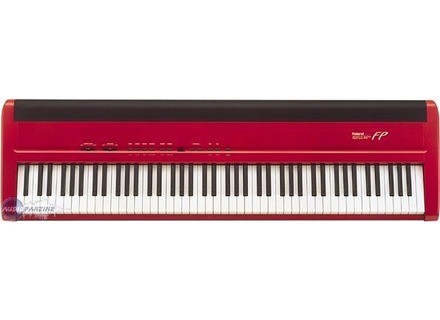 FP-8, Digital Piano from Roland in the FP series.

View other reviews for this product:
Easy to set up.
Two sounds can be layered, for example: piano 2 + violins pad 3. (with volume foot control for the latter): I have never found anything similar since, a pity!

The keyboard has real hammers, felts...the best at the time!
Over time, the piano demands some maintenance (nothing unusual for a 20-year old piano!): Changing the felt and rubber mutes. On the other hand, the plastic part around the hammers cracks with time. To put a remedy to that, remove the hammers and apply a bit of super glue, and the cracking stops.
I still enjoy playing this piano very much today.

I shouldn't say this, but I always use the electric and acoustic piano sounds of the fp8. It is slaved to my s90xs, because the piano sounds of the latter, which is much more modern, seem to me duller and without depth compared to the good old fp8. But that's a matter of taste!

I have noticed a frequent problem with this piano: the sound (through the line output or the piano's speakers) crackles quite a lot and even disappears sometimes, up to the point of making the piano useless. (Some have thrown their fp8 into the garbage can!) BUT IT'S NOT THAT BAD! 4 capacitors (that cost a couple of cents each) on the piano's motherboard burned out and had to be replaced. After an hour of work the piano is like new and ready for the next 10 years!

In short, despite the several offers to buy it from me, I still have it with me, as an antique among the most modern pianos. And like every instrument you have enjoyed playing, it's hard to let go of it!
Did you find this review helpful?yesno
Cookies help us improve performance, enhance user experience and deliver our services. By using our services, you agree to our use of cookies. Find out more.