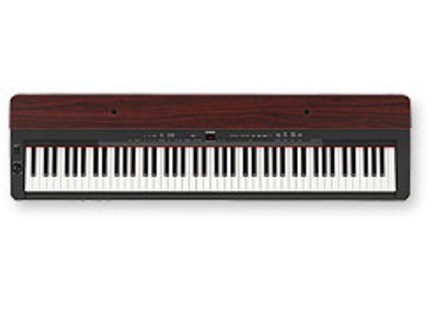 P-155, Digital Piano from Yamaha in the P series.

View other reviews for this product:
The Yamaha P-155 was the piano I wanted. I spent so much time in a local music store banging away on this piano in awe, especially since it didn't cost so terribly much. I couldn't afford it at the time, so I got a Casio Privia PX-330. (See my review for that, as well!)

You'll never wont for polyphony on this big guy. This is a very crucial point, because while I love the quality of Yamaha instruments, Yamaha does have a rather despicable habit of artificially limiting its lower end models to entice buyers into the higher end. For example, if you look at the P155's younger brother, the P95, you'll see next to no connections, and a 64-note polyphony. Anemic compared to its 128-polyphonic and full featured peers!

This is also peevishly exacerbated by the lack of a direct USB connection to the computer. It's not something I needed, as I do own an audio interface with MIDI, which thankfully, the P155 has the decency to support, but seeing competitors load their pianos with features while Yamaha pretentiously totes its superior sonic signature around in a Burberry handbag does get a little obnoxious from time to time.

The P155 is a full piano; it has the 88 keys expected of a digital piano, and while it does have the standard extra sounds that come on the board (these are actually quite phenomenal!), the focus is, of course, on the actual piano sound.

This is obvious because many of the parameters for the piano sound are right there on the surface; there are no clunky menus that you have to scroll through, (like on my PX-330, which doesn't even have non-volatile memory! Gross.) with adjustments for curves, brilliance, and other things accessible with their own dedicated buttons.

This is the part where I tell you to go listen to the samples that are no doubt floating around the internet. You'll see a definite increase in quality from the next tier of pianos down from the P155 (P95, PX330, SP250) so I urge you to go find them yourself. I'll tell you, for the sake of the completeness of the review, that it's phenomenal!

And the touch is something to dream about. Very few digital pianos come close to the P155. Even the Roland's, with their precious realistic escapement somehow seem to pale in comparison to this. I have no idea how, but remember that this is an incredibly subjective point.

It's a shame that this wasn't cheaper when I was shopping for a piano. If it were the price that it is now (about $1000) I would have sprung the extra cash for it. If you have the money now, get it. You won't be disappointed.
Did you find this review helpful?yesno
Cookies help us improve performance, enhance user experience and deliver our services. By using our services, you agree to our use of cookies. Find out more.