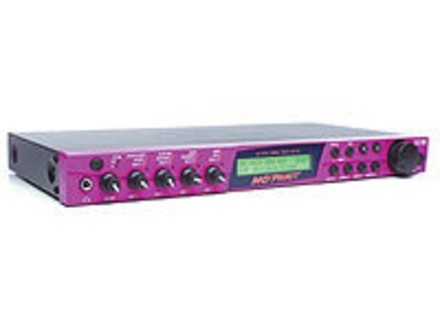 View other reviews for this product:
There are 4 versions of Mo'Phatt. The Mo'phatt, the Turbo Phatt, the MP-7 Command Station and MK-6 Keyboard. All the same card possdent ROM: Pure Phatt.
The module is a 1U Mo'Phatt ddi musical styles trs guys like the RnB, rap, dub, ragga and the Tri-pop. On the menu, bass samples, scratches, Fender Rhodes, Kits overddrive batteries with electronic and acoustic presets, loops and especially multitimbral rhythmic formats that use the synchronous schmas arpgiateurs are Copyright dpourvus for misuse in all musical productions. Thank you E-MU.
The Mo'phatt as his muscles possde version 4 banks of 128 presets + 4 bank of presets Users. Pipelines Limited empty slot to install a card deuxime Rom available in the catalog (12 diffrent cards in total).
The sounds are paramtrables Obviously from the surface of which CONTRL possde potentiomtres 4 x 3 = 12 levels paramtres IMMEDIATE possible. FYI everything that can be said can be as faade via MIDI from an external MIDI interface.
the Mo'Phatt possde 6.35mm 2 audio outputs, three MIDI (in / out / thru), a 3-prong electrical plug.

The interface is clear trs. It does dveloppe on Audity 2000 and reproduced on all models E-MU. A user interface that is exactly the same on all modules of E-MU sound.
The edition is Ct sounds simple, it plutt ct effects of a more complicated. The Mo'phatt possde doucle a Stereo effects processor does not offer the possibility to route the effects will. It's everyone or anything.
The manual in French is not a Bible and apply all the sound modules of the brand.

It is primarily the ct ITS Mo'phatt vritablement is effective. The sound environment really well tudi t trs and sound designers attacked donns field day. This is an excellent module as well as the individual card can be installed in any other module E-MU.
a ring.

This is a good module. E-MU quickly learned hand Ya ... or Ro ... or K. .. that musicians still needed our answer to a espce CODE sound verging almost CODE gntique. The man Difference in skin color, music by color or musical sound, the modules E-MU also possde their own skin color and their own sound color. This is shuffled between genres and sounds as in humans is important for a difier cohrence. The plurality of sounds in the range E-MU's really important and the bank is sound trs exhaustive.
For my part, we just go round the ROM cards of competition in this E-MU has strong trs. Even if the effects are difficult edit.
It sounds, and that's all we ask. ..

Gentlemen, Ladies
My respects
See the source
Did you find this review helpful?yesno
Cookies help us improve performance, enhance user experience and deliver our services. By using our services, you agree to our use of cookies. Find out more.