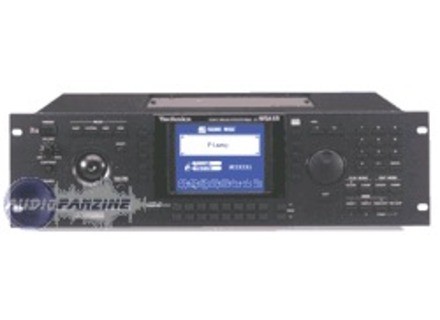 View other reviews for this product:
rack without a keyboard,
a floppy drive that is used exclusively SMF player,
a ball type controller similar to that of a Wavestation.
a very large screen (not very readable though) surrounded by many buttons, 4 separate outputs
and a pair of MIDI IN / OR CHANNELS for 32 and 64 voice polyphony announced.

announced as a VA, and 64 voice polyphony, it was only half true. waveforms are not modeled and proviennet wave tables. Only treatments were modeled through the resonator, etc. pinch.

So the interest is limited, and critics were quick to reflect this.

the user interface is deplorable. the function buttons are not aligned with the screen display, navigation in the list of sounds is incomprehensible sounds and many sound similarly.

after several months of use, I gave up, yet there was power in the machine. I managed to get some kick-ass tones but it takes too much effort to achieve the desired results.

catastrophic example: you can not use the large data wheel to scroll through this list of sounds, alphanumeric input is not always allowed ... Nothing in this synth is simple.

Edit: complicated, and again, the buttons are not positioned correctly ... boring. only passionate synthesis forgiveness treatment can make their bread and butter, others go your way ...

basic sounds are bad, only the electric pianos are ok but nothing special, ground almost good, but all tend to average / bad

very difficult to use with the origins of sound banks. effects very very average, however the expression was very correct.

favorite sounds: tablecloths and some patches found on the net. the rest is forgotten altogether.

Please note there are expansion cards (not found), but adding dance techno sounds, it seems it gives some strength to the rack.

I bavais rack unknown before this was released, I bought it 10 years later, I kept it a year and I am separated.

technically, it's a collector, I do not even know if there was a hundred copies worldwide. Unfortunately, it does not ring, it is not intuitive, in short, it is beautiful but that's all.

But with a lot of patience, you can get a little something interesting, but there are ways to do better today simply faster and much cheaper.

Finally, it is half a VA, which is based on wavetable, and aliasing means.

announced as the first real synth Technics, it has unfortunately sunk the firm. Yet it could have been otherwise if the bank original sound was more polished and debugged if the interface.
a huge mess, where there was huge potential for the brand.

is a rack for a museum and nothing else. However, the keyboard version and different controllers can do a good keyboard control. Touch is very special.

for the record, I feel like I have done some fine pictures of this machine (photos available on my profile)
See the source
Did you find this review helpful?yesno
Cookies help us improve performance, enhance user experience and deliver our services. By using our services, you agree to our use of cookies. Find out more.