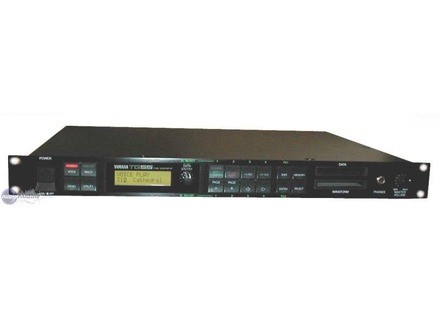 The TG55 is the expander version of the SY55 sounds with 64 + 64 inmodifiables ROM sounds + 64 user editable sounds (with a sound card data + wave).
Everything is editable, and obviously it's pretty impressive from elsewhere (many parameters).
The polyphony is not enough (16 marks max) using a single item (max 4 LEMENTS).
ie we can choose to edit the sound to a simple element (a wave AWM) or a little more complex to two elements (2 waves AWM) or 4 elements (j'vous hints) (3 elements not possible).
But that hurts the bottom, because the more full sound, reduce equipment in polyphony.
1 item = 16 notes
2 elements = 8 notes
= 4 elements 4 ratings

A level extension there are memory cards, which are stored on the user patches ... and there are data card (containing the patches) and Wave (containing the waves) ... this type of card go hand in hand (otherwise it does not work).

Level connections, different stereo outputs (j'me remember well), a headphone jack and of course the connectiquye Midi in, out, thru.
Multitimbral?? I think it's from 16 (am not sure).

Editing of sounds:
It's not that complicated, it's a bit long if you have no editor pc because there are many parameters, but once you know the beast, it's going alone.
What is nice is that editing a sound, at any time you can change the type of wave can be compared with his departure, one can edit another item with the same configuration as the wave we have to edit etc ...
It has a double filter and it ... it's really interesting.
The key to the synthesis of the expander is in the filter.
In terms of manual, it is well explained! Yamaha makes an effort on this one here (except in explanation of the memory cards were always afraid to make a mistake manipulation).

Sounds Bhen ... It's always a matter of taste of course.
I read another review on another site saying that the sounds were "nags" chuis not really agree.
Good sounds ok 64 + 64 is not much compared to what is now ... but what sounds!
It's so AWM2 of 16/24 bits sampled what is on ... is that it does not sound toy is a real synth.
But hey, it's not easy to radically alter the wave base (can not make a pipo piano), but it does well even when the game thanks to two filters.
In terms of musical style, Bhen I think there is something for everyone, except maybe techno.
Effects: there are 34 available (some distos) and edited more!
My favorite sounds: Bhen, the ones I published (hehe) and the bell sounds like, really realistic pianos DX cool!
I also like the pseudo analog VCO, there's way to edit a lot of sounds from it.
The drum kit is a bit bland for my taste!

I use it for about a year, what I love most ... Bhen publishing (impressive).
Minimum: polyphony!
I also have cards Sax data + wave and they are very realistic!
It seems that it can be compared to a much more expensive Korg M1 (I never used the M1).
For money, unbeatable!
Yes, I would do like that choice and dash ... I care!
See the source
Did you find this review helpful?yesno
Cookies help us improve performance, enhance user experience and deliver our services. By using our services, you agree to our use of cookies. Find out more.