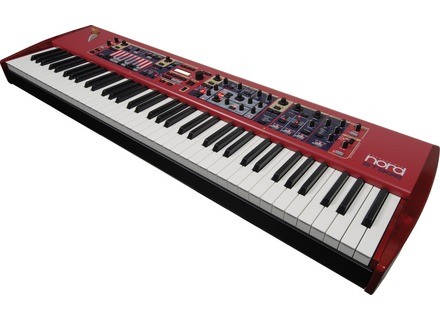 View other reviews for this product:
This is version 76 keys of the fabulous Nord Stage 2. 76 keys and 4 equals 6 octave keys (one octave lower than the 88 keys, therefore, more or less).

Otherwise, it is strictly the same device as the NS2 88 keyboard including HA. Not to be confused with the version that has 73 semi-weighted keyboard called "waterfall".

In my opinion, this is the keyboard of the series to have as its scope is sufficient (one octave below gene is AB-SO-LU-TION NOT!).

It measures only 1113 mm or 1 meter 13 long, 1 meter against 39 for 88. The keyboardist stage professionals understand how this keyboard is interesting, if not the most interesting range: ease of travel / transport, saving space on stage, and 3 pounds lighter.

see reviews on models 88 and 73, including the EX and classic, I plussoierai by saying: we can do better in terms of ease of use.

excellent, nothing to throw!

A real change at all levels compared to the previous generation (EX, which itself succeeded the original so-called "classic").

The pianos are fabulous, especially the imperial. 500 MB of memory dedicated to pianos, there is something to knowing that the imperial take 200MB, rest 300 e-piano, clavinet, etc. c'st to say then: happiness!

Organs are derived motor C2, the trend is very clear compared to the EX. Vox and Farfisa banks will be new standards! A falling.

The effect section is terribly effective.

I will not list here the keyboards I've owned or still owns, but I simply say this: probably the best I've ever had in my hands. The price is justified.
See the source
Did you find this review helpful?yesno
Cookies help us improve performance, enhance user experience and deliver our services. By using our services, you agree to our use of cookies. Find out more.