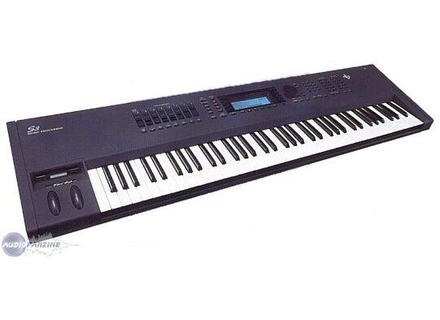 View other reviews for this product:
A little-known synth injustemen! ! !

- 12dB/octave 2 multimode filters per voice (even with 32 votes with the turbo!)

- Possibility to sauvgard whole ram on a static RAM (optional 60 euros) as a, no need to rechager samples and programs or sequences.

- Polyphonic aftertouch keyboard, velocity and even to attack relachemen!

- Several megabytes of sounds already in the machine

The machine is very complete and running with the Mac microprocessor of the time!

We can patoge a departing but after it's great.

The manual is even necessary quantities at the beginning but we win a lot of time demandan someone know.

The machine is quite logical as a whole.

Sound origins are a bit hollow but when we start importing its own waveform is a killer!
The two multimode filters resonance (modeling) can be combined to form a filter 24dB/oct the envloppes are just editing and comprehensive. Each filter has an adjustable gain five positions that can saturate the waveforms. The cut-off of the two filters are sparments assignable controllers that can be assigned to the sliders.

When you put the filters on the way (open bottom with resonance 0), the sound becomes more present and larger (a reacts differently depending on the filters)

For cons, the multi-effect is not clean and beautiful vraimen

You should be departing meter vraimen but the machine do everything and a master keyboard EXTREMELY flexible.
Its use in GM is not great, it is imperative edit sounds.

Again if it was not I buy a problem (but used) because it vraimen a machine do everything that does not sound bad at all when you know the exploit.
See the source
Did you find this review helpful?yesno
Cookies help us improve performance, enhance user experience and deliver our services. By using our services, you agree to our use of cookies. Find out more.