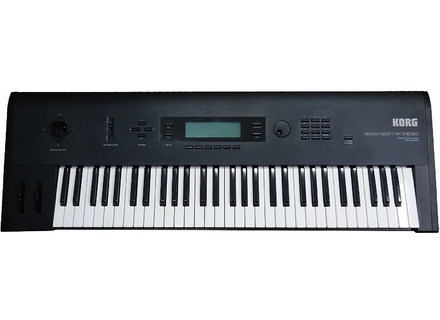 View other reviews for this product:
Synthse by wave-vector and squence, 5 octaves-and aftertouch-VLOC
-Pitch, modulation wheel, joystick and more of the famous ...
-4 Audio outputs (jack), headphone jack, 2 jack pedals (sustain. ..) an outlet damper, MIDI in out and through
A bank-ROM 365 waveforms for the Wavestation a little more normal for the "ex", version "two" of the Wavestation, two simultaneous effects ditables and choose from 47 for the normal version and a little more for the version "ex", or in parallle SERIES (flanger, rverbes ,...), sounds are called "performance" patches from their factories even dcoulant waveforms ... (it's a bit complicated to explain in a few lines!), 50 performances are on the ROM and can not be modified, two rams to load or 50 CRER each performance, the scorecards "prog" may contain 50 performances as well (I did not, but can be a seller will give you Wavestation ...), finally with maps containing existing waveform but also have become trs rare find ...
Editor-handy PC and Mac (SoundDiver, etc ...)
Dpend-polyphony in the number of waveforms to use the indoor sound

-Having bought a Wavestation "ex" a few weeks ago, I do not matrise forcment any custom settings! As I understand (I hope!), A sound is made up of either a sequence of waveforms (Fully ditable) or one or more waveforms "simultaneously quot; which changes the shuffled from the joystick or Program The "movement" of the latter, one can CONTRL and the "mix" of diffrent components of a sound. The hardest thing to understand c 'Systm is the waveform that organizes their same patches that combine to give "performances" or (what is meant by pressing a button ...).
-The edition is easy thanks to a system that notch and the menu quite clear, and even easier with a computer editor.
-The manual has two more facicules troisime a version for "ex", they are quite clear and agrments many schmas and drawings.

It is much Wavestation rpute for sounds that voluent long time, like a string sound that turns into white noise in seconds, with a small low-line squence kind derrire. .. Short of grouping of immense use in all styles.
I do not expect too much of a synth raliste it, but the waveforms of existing instruments are not bad ...
-Expression is optimal, thanks to the joystick, the wheel, which can CONTRL lot of paramtre (effects, development of sound components, mix between the components ...)
-Factory sounds are not convincing trs, but banks in sysex Tlcharger allow better viewing opportunities of Bestil.

-I bought a few weeks ago, that's why I think is a little summary.
It CONTRL paramtres of the joystick is glove factory sounds are zero ...
I bought it after the advice of a friend who has for several years and does not it always Sparer ... (Hello alex)
My advice-find version "ex" or expander for ajot effects and waveforms.
-Even if the synth is quite difficult to understand at first, it allows CRER unique sounds rich and evolutive trs
See the source
Did you find this review helpful?yesno
Cookies help us improve performance, enhance user experience and deliver our services. By using our services, you agree to our use of cookies. Find out more.