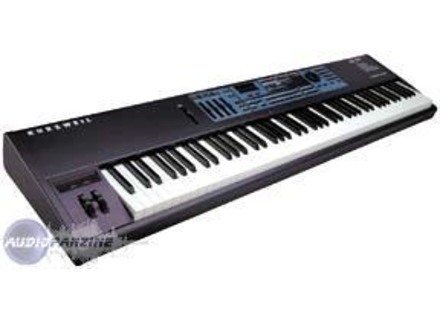 View other reviews for this product:
PC2X: Midi Setup set to control a sound module Roland SCD70.
The + / - is confusing, it is a long time to understand
it puts your digital values ​​captured before or after the colon.
If you want to dispose of its Tambra Atmos is 100-11, one must "think"
11 variation of the group 100 or 128 * 11 + 4, 4 is the selection of the SC8820
This is 1412. The mini screen gives 1412:100, provided that you decide
number of sounds in "relative" c to d 1 to 128.
The bed PC2X General Midi, or Atmosphere, but does not know up
Tambra Atmos. (The name of his is perhaps not in the small box)
I only just beginning to make my Midi Setup (March 2003).
Beginning in September 2003, I can not do a sysex dump,
before installing the new version 2 and 3 recovered from kurzweilmusicsystems.com.

Manuel American, and very little diagram, text-to-read text,
A good diagram is worth a thousand words
Still on the kurzweilmusicsystem.com doc version 2 and 3
and midi files to unzip the download not work too badly,
but I'm stuck with the dump all objects that do not work
Is my PC2X down? I will not install these versions to lose
my setup
It's good I got the transition to Version 3. Kurzweil briquettes and foun
a series of 128 + sounds - but then to install arm yourself with patience
with Midi0X, Cubase Studio Module, and other no way to load the midifile
recovered on the Internet works is the only Windows Media after 20 '

Sounds small, compared to 480 RD700 sounds are great.
It's handmade, and Hammond B3 incorporated? Seems correct.
July 2003 - Bug in moving from one house to the sound KB3, obligation
PANIC press to restore the "presence" of an expression pedal,
it is painful! kurzweilmusic.com on we see that there is a version
software to download. There are more things to do

That's it, I plugged in a pedal ROLAND EV-5,
I have my decrescendo / crescendo.
I need to dump SysEx to preserve my setup,
and gradually add Midi Setup. For me to have wrongly arpégiattttor tempo
to 120 buried in the nth default settings. If I had designed the machine, pressing Arp,
a tempo before the numeric keypad and Hop!
If I had known I would have bought another keyboard with a larger screen
talking about the setup: if the screen was bigger we could see the configuration,
as midi channel is set to swell with the pressure of brass,
such as with the midi channel is used for tablecloths and the pedal reacts
the cursor, sets the tempo usually D but you do not see in figure
another cursor injects more or less effective, you need a big book with you
where you have all noticed, there are really things to do on the MIDI Setup 32 to 126
and from 129 to 256 and that of 4 midi channels, you must learn the method and the setup provided
if you're lost and you can easily mix the pencils and you write to red instead of blue
it's not quite right in concert
In late 2004 I did not yet in hand, especially in imitation Hammond B3,
4 sliders and touch the wheel + solo that's a lot, if there was the 8 zippers
short time by the runaway car because it must anticipate the support of the pedal rotation
there are bugs in memory internal sounds, you go to a sound of strings and brass this alternation between these two sounds is not the same every time, and pass on the 2 nd set provided
Internet (internal sounds and more) and return to his first game is the galley,
in the dark you will not see your cursor, adjust the volume of a body with two sounds is quite difficult,
is the use that can be seen if you've bought good stuff and as I watched, too, without glasses
I see quedale
***** To go further with the B3 emulation must go in tone it seems
there are always too mellow rather than Peck and Bob's which are
more realistic settings see the doc
I still say that with a big screen is a great machine, we should see if with
a laptop computer and appropriate software that does not simplify the use but ...
are rumors that there are no dealers in France but it's stuff
strong it should take a few years without SAV
See the source
Did you find this review helpful?yesno
Cookies help us improve performance, enhance user experience and deliver our services. By using our services, you agree to our use of cookies. Find out more.