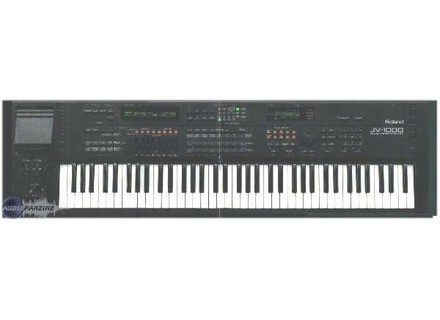 JV-1000, Digital Synth from Roland in the JV series.

View other reviews for this product:
Incredible machine, it fills me live or studio. Despite his age, he remains a traditional workstation. The sounds can sometimes surprise ... It has expanded the Voice in my case and it is very easy and intuitive to find the sounds of live programs. It reminds me of the sounds of my old SC-55 ... There are over 12 years! Small sequencer interesting and easy to program, but I deplore the 720k floppy (for a 1993 model, Roland had to smoke to make a 720k).

I have the original manuals, diskettes demos (which are very good!). These demos illustrate the power of the machine ... Remember that the JV-1000 was sold in the vicinity of $ 3000. The buttons are clear, no menu ... submenus ... sub-menus ... and see, where was I with my sound! I like that, you weigh the "peak" too bad it works! The effects are basic, but provides a flavor for some interesting sounds more acoustic, see techno.

The sounds are outdated, well we know, is like the computers of 1993 But you still use a computer manufactured in 1993? I like the strings sound, it's Roland after all! The piano is horrible, the rhodes acceptable, sounds like excellent. We can even add two expansion cards in the back, at least if you have a V-Exp ...

I have purchased because it is primarily a Roland because it has 76 keys of great quality, ease of use and solid construction (although sometimes playing a little hard on the keys, it is a kind of "reset". I have not solved the problem, perhaps a connectivity problem on the inside, if anyone can enlighten me!). The MIDI implementation is OK, I tried several other models and Roland remains the key to my eyes the best in the world!
See the source
Did you find this review helpful?yesno
Cookies help us improve performance, enhance user experience and deliver our services. By using our services, you agree to our use of cookies. Find out more.