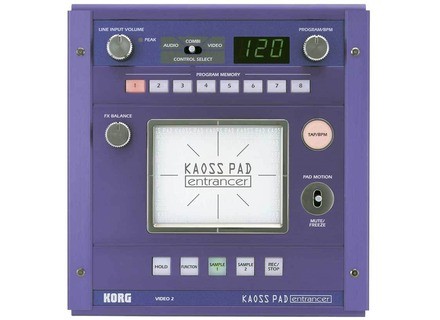 A unique product CONTRL both laudio and video. Technology KAOSS PAD To create visual effects musically. LEntrancer has programs contrlables intuitive and in real time with a rapidity that you will not find with any Vido Controller or software VJ.
How long have you use it?
almost 2 years
1 - What is the particular feature you like best and least?
The more
Systm trs trs practice pad / simplicitbons and many effects on average (see less) / complementarity with a video mixer / small easy to carry / opportunity to sample 2 X 6 secondes. / PAL and NTSC / International 110-240V Transformer / 2 inputs but no ability to bypass a video mixer so you can not use a channel ... Damage
Minimum:
Some effects are bad and / or crenels.Korg should not have put them with the rest. / In my opinion play audio and video at the same time is a bit unrealistic given the violence some audio effects and since the two types of effects simultanment arrive so we would have to suffer the effects without any choice.
- Have you tried many other models before acqurir?
yes but there is not much equivalent
- How do you report qualitprix?
In France it sold in the silent 1400 euros which is twice as expensive as the United States: 700 euros
I did not buy in France ...
When Mr. Gaffarel stop pigeon customers everything will be better ... I suggre a change KORG distributor.
At 700 euros it's still a bit expensive compared to the quality image output. We need more CPU and more RAM for Samples
- With the exprience, you do again this choice? ...
Yes, because right now I could not find a better equivalent Moreover it allows two types of connections: one extension of a video mixer to make an impact on the overall video or on the a vidos sources before attacking the mixer (Effect on a single channel video

N / A
See the source
Did you find this review helpful?yesno
Cookies help us improve performance, enhance user experience and deliver our services. By using our services, you agree to our use of cookies. Find out more.