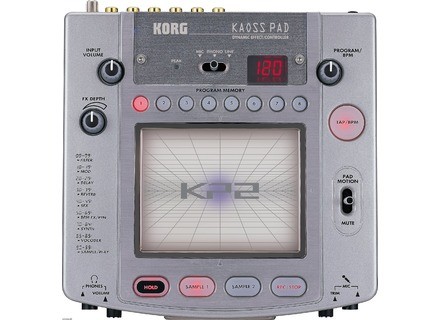 Value For Money : Excellent
View other reviews for this product:
The KaossPad II (or KP2) is a multi-effects processor digital format "box desktop", a vague parallelepiped metal (aluminum?) With some controls and a sensitive pad.

It offers a good amount of effects, some tempo-sync (via MIDI in), which can be recalled via buttons and "automated" with "motion sequencer" called "Motion Pad." You can use the KP2 on mic input jack (without phantom power) or stereo input / output RCA (damage) either directly or in an effects loop. A tap tempo can give pulsation effects in the absence of MIDI Clock.

The KP2 is relatively "user friendly", we can use it as a DJ or in a more "studio" as MIDI gives a lot of opportunities both in managing the effects in the use of KP2 as a MIDI controller.

To go further in the MIDI and advanced it is better to refer to the forums (AF among others) that manual not really explicit. A manual that talks a lot but does not say much, unfortunately.

One might think that the KP2, designed for DJs, does not deserve a place in the home studio.
This is wrong, but to take all the juice it will pay close attention to the level of input and output and focus use in send / return rather than insert.

The effects are quite good overall, especially the delays and filters. The sampler is fairly usable if it expects a reasonable audio quality.

I use it in the effects loop POD X3 Pro, exclusively for keyboards and especially for an old Farfisa Matador organ. The result is quite good.

I use it daily for a few months.
This is my second effect oriented "DJ" (I had a Pioneer whose quality does not convince me).
I like the price / quality ratio very good opportunity. I also like the KP2 for its compactness and quality of construction. Too bad that it is equipped with RCA and has no digital inputs / outputs. A pair of optical or coax SPDIF would be a great addition and would bypass the converters without being bad, are not exceptional.

I remake that choice without a doubt, and I do not go to the KP3 that bring me nothing more.
See the source
Did you find this review helpful?yesno
Cookies help us improve performance, enhance user experience and deliver our services. By using our services, you agree to our use of cookies. Find out more.