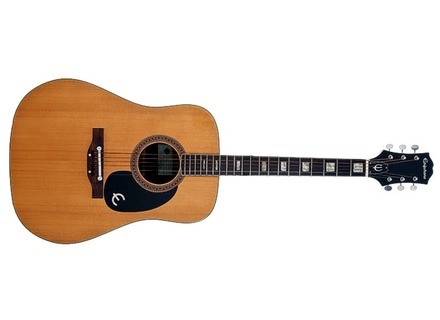 View other reviews for this product:
Guitar over 40 years since I bought in 80 years to someone who had just been to a folk by a luthier. It is marked "made in japan" but ... Kalamazoo Michigan! She had sold 700 francs (120 euros) at the time.

The handle really think that kind of a Gibson SG electric guitar, not too thick, really nice to my taste although the polish of the day is a little "sticker" over what is done now.
It is a bolt-on neck, the rule is trussroad by accessing a plaque at the head, as in Gibson.

Mechanics can be a little weaklings have aged poorly and shakes a little and yet it takes the agreement correctly, I think of the change but I am not in a hurry either.

Really nice on the handle that allows an action game string bass, treble access is not very easy but I'm still doing well (I have not had moultes folk guitars to compare ...) and even after long gaming sessions, it was not hands defeats!

His interest is: "The Sound"!
I will never part with this guitar because it sounds really good.
I just give him the ropes and worthy of the name is still a pleasure: his warm, distinct notes of serious acute even in the game "crossed nag" a little mellow welcome short, this guitar perfect for a game picking folk ... has also noted an interesting volume in the game, it was really well thought out.

Note that it was somewhat abused in the past and the soundboard is a bit distorted on mine because somebody had to go up one pulling a little too large without adjusting the handle properly yet but it sounds not fake!

It reminds me of a gibson its clear without the side crunch of course! I understand that this is the model of McCartney in the white album anyway, my songs "Blackbird" "Julia" is exactly what her ... for info.

I noticed that people who tried the lay looking at her with great respect for each time it is a sign that does not disappoint ...

I've had 25 years now and have been very well advised to acquire as it ages well and the sound it is endearing!
It was made at a time when we built "to last" and I doubt that many older guitars now as well!
I would do without hesitation that choice of course and suggest you throw it if you find this model in hand.

I put around 9 this may be a bit subjective, having no significant experience in the folk but the price at the time was absolutely good for 120 euros and now I can not imagine that we have something good cause.
See the source
Did you find this review helpful?yesno
Cookies help us improve performance, enhance user experience and deliver our services. By using our services, you agree to our use of cookies. Find out more.