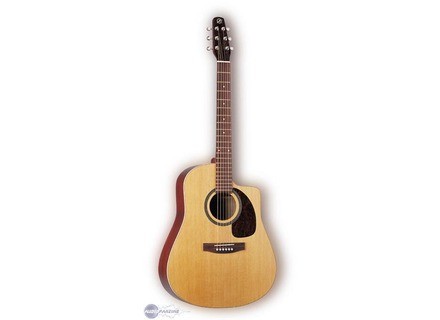 View other reviews for this product:
Canadian guitar
Cedar
wild cherry back and sides
Mahogany
key rosewood
Preamp LR Baggs piezo pickup with 2 duet microphone and "aerial"
looking pretty simple, the veneer is head of the beast plastic, not pretty, pretty (he could have done better). but the rest is well made

The neck is quite thick, and may offend some. Personally, I love it, want it well in hand.
access to your personal treble is good but I'm not often (not really the role of an acoustic)
The body is shaped western, basic, classic.

Hip, personal, not glop! I have had enormous problems of feedback I think the sensor aerial infinitely sensitive to noise outside. If I bypass the air, the piezo is doing not too bad but still a tendency to feedback. ca just may be my amp (an ibanez troubadour)
against by not plugged in, tip top. bliss. I go up with ropes Argentina (usually mounted on gypsy guitars) and I can tell you that it is moving. oddly, I think it sounds even better when the strings are old and rotten. j'obtient more bass and a more matte. pump to rhythmic gypsy, the best. just remember to adjust the truss rod, because the action is a bit high of origin. mediator game is great too, not far from a gypsy.
wholesale trendy beuurk
not connected, YYEEESSS!
I would put even when 9 / 10 because it connected ratrappe not connected. after, it's true that I regret a little, having invested more often to have the preamp and not use it but not as well will ring not connected, I will have sold off long ago.

It's been two years since I tortures and I'm delighted.
I repeated, trendy, not good, not plugged in, all good.
I did all the store before choosing Lyon, I had to try a good score and I must admit that I immediately flashed on the skyscrapers.
for the overall score, I have a big dilemma.
The problem is that there is the same model without preamp and therefore less expensive, but I do not know if the sound will be the same (I did not try) and it would be a shame to pay more for the preamp personal that does not satisfy me at all.
after, it's true that not plugged in, I'm crazy about this sound.
So to be objective, you see can be more towards the acoustic version.
it breaks my heart to put a 7 / 10 but hey ....
See the source
Did you find this review helpful?yesno
Cookies help us improve performance, enhance user experience and deliver our services. By using our services, you agree to our use of cookies. Find out more.