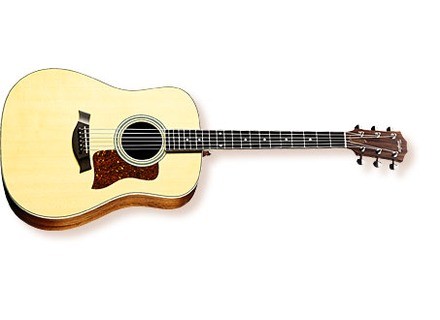 View other reviews for this product:
This is a great Dreadnought Acoustic guitar made by one of my favorite guitar manufacturers, Taylor. I have been getting more into the dreadnought sound recently, as I've been playing by myself and need a more powerful sound when I play. The guitar has a sitka spruce top and a Ovangkal side and back wood, which is a wood that I've never encountered before (at least knowingly). There are 20 frets on an ebony fretboard, which I love on an acoustic. There are no electronics on this guitar, it is simply a purely acoustic guitar.

The top frets, unfortunately, are very difficult to reach. I really don't think that most players who are looking for this type of guitar would worry too much about that, though, as the guitar is great for rhythm. That isn't to say that you can't play some sick leads on it, but they don't necessarily need to be really high up on the fretboard to be effective. The great Taylor sound is there immediately, as long as you are a decent player they make you sound great.

The sound of this guitar is a rich, powerful sound. I really like just strumming really hard, it has an energy and a power to it that can really be intimidating when playing with a softer guitar. I also really like to pick and fingerpick with it, the extra oomph that is has compared to normal acoustics is a striking contrast to a strummed normal acoustic. I have found that if you have a good control of dynamics (which most players don't anymore, sadly), that this guitar has a vast dynamic range that can't really be emphasized enough. One thing I've noticed is that a bright, brittle tone (which I find I need sometimes) is hard to achieve on this instrument, so be conscious enough of that when considering it.

Overall, this is a guitar that feels really good to play and sounds amazing. The dreadnought sound that Taylor is exploring has produced some great results, and this is no exception. In fact, I feel as though this might be the best dreadnought model that I have played yet, and I've certainly played good ones. Highly recommended, assuming you can afford the almost 2 grand price tag. Craigslist is probably the way to go on this one.
Did you find this review helpful?yesno