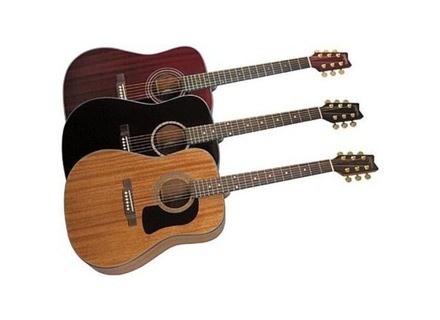 View other reviews for this product:
Bought this at Musicians friend after Mars Music went out of business. From what I gather this is a custom build from Washburn that was made for Mars Music that needed to be liquidated after they closed up shop. Usually I am leery of closeouts and whatnot, but for $99.00, this thing comes with Grover tuners and is well built! It sounds great and after I had the action lowered and the right set of strings on it, it is awesome. The guy at the store wanted to buy it off of me for $300! I went back and bought a second one of these because they are such an awesome deal.

Do NOT miss this deal! The sound is great, and with heavy strings the lower end is really strong.

Some of the upper frets needed to be seated a little better, I had a slight vibration on the third fret on the E after I lowere the action but after a little adjustment it works like a charm. I almost feel guilty about how cheap I got this new guitar... naahhh!

You have to buy one or two of these.