Add this product to
Arturia DrumBrute
1/ 707 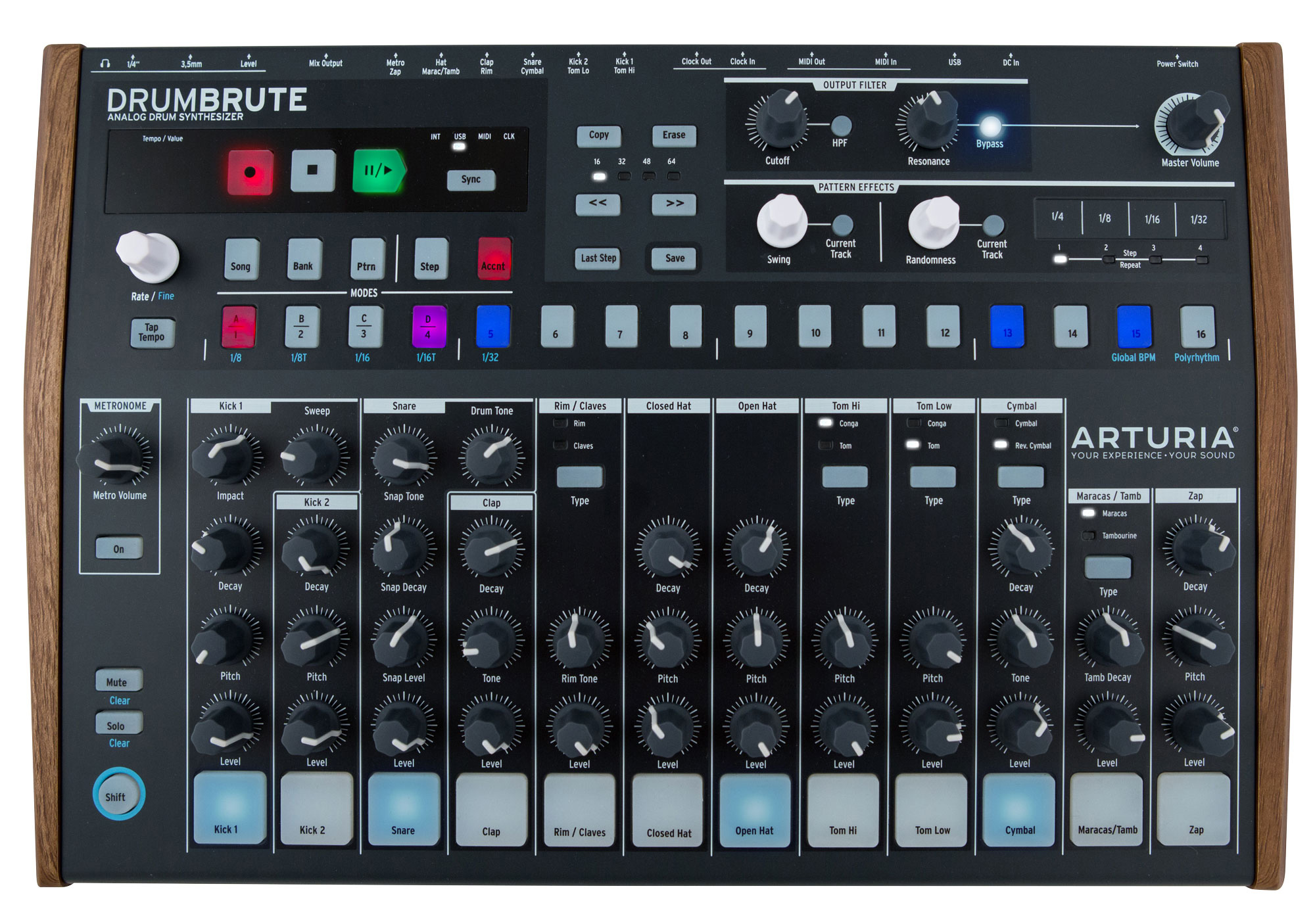 The knobs are very nice, the pads are pleasant and the ribbon controller is really coll.

Soundwise, some will disappoint a bit like the clap, the so-so snare… It’s essentially the filter variations that are “just a bit not enough”

It offers 12 independent outputs (with some instruments sharing the same channel) and a main mix out.
And this is where… you can put whichever effect you want on any given instrument!
That’s terrific, you can do what you want to do (provided you have the necessary mixer and effects).
The sequencer is very nice, even if a longer “song plus” mode would have been appreciated.

I’ve only just started using it, and have no idea so far regarding the software side, which allows many modifications, saves and so on.

The device was tailored for live use, but can also really find its place in a computer music environment.

As far as I’m concerned, I built myself a set that involves a Bass Station 2 + a Circuit + the Drumbrute, and i’m currently waiting to receive cables and effects (hurray for Christmas time, ladies and gentleman!), and as an already insomniac person it will certainly take a sledgehammer to get me to sleep when I get all that!!!

The device is very intuitive to use, programming it is simple (though some aspects remain a bit obscure but i’m only starting with it).
The manual is well done (unlike some competing brands whose name I won’t mention here).

It will clearly need extra effect pedals (there’s plenty of choice for that), and then you can make it sound as you like, and make it do what you like!

So far, its limitations don’t bother me at all.
In my opinion, Arturia hit the bullseye, I hadn’t had so much fun since I got my Circuit!

Take it as a beginner’s review, but what a pleasure to discover it day after day

Clearly, I’m not about to sell this one!

And i’ll learn to know it even better tomorrow, yeepee!

PS : no polyrhythmic mode, only polymetrics (which is already complicated enough).

PS 2 : now, I have a bit more to say about it.
Its ergonomy is still flawless.
You really MUST add effect pedals to it, and/or use your mixer’s effects to make the shy-sounding filters sound better.
It’s all down to trial and error.
So far, I have a basic distortion pedal and a Marshall compressor.
I use my mixer’s effects – reverb, flanger, earlyreflection & so on – plus the presets, and things start to get interesting.

The MIDI control center is very interesting, but it takes a pc – grrrrrrr !

The sequencer is very nice, it provides many a possibility (especially the polymetric mode which is a real asset – used alongside the random feature on the current track, it provides a result, how could I describe it ?...).

I really like this drum machine, and its cons (which certainly have to do with the requested specs to offer it in this price range) aren’t a real problem to me (well almost not, but such limitations can be made up for and I’m already considering buying a cheap looper).

But even with just a chorus and fuzz/ overdrive (better than a “normal” dist) pedals plus the mixer’s internal effects, there’s already much to be done with a wide array of sound to be explored

What a pity the filters are so soft-sounding…
But, what fun!

PS3 : the sounds are flat and you have very soon ended exploring them all.
No way to use it without additional filters/effects.

I need a REAL reverb, a flanger and a better mixer (more DJ-oriented), a kenton midi thru 5, a keystep, AND... a looper AND – most important – a Squarp Pyramid!
But I’ll get one, someday!

With only my Circuit slaved to the DB, I’ve just done (not without errors) a 1h30 long mix!
Easily, so in a whole night…

And, with an audience !

This machine has a great ergonomy!
As for the surface inside, well, it’s less reassuring.