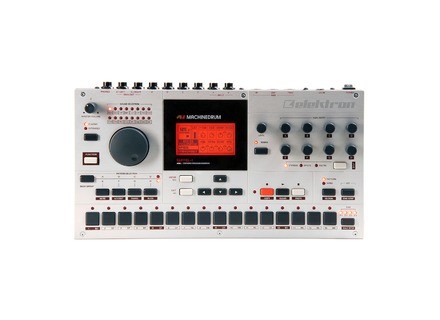 View other reviews for this product:
Solid machine, responsive, ergonomic and thought to Live.
MIDI classical trio + 6 separate outputs (TRS) + 1 IN
I regret that there was not eight separate outputs.
Not need a publisher, is created on the fly;
The Machinedrum embeds several synthesis engines, each summary is sufficient, without more.

That is well thought out, is that you can create a track dedicated to real-time control of all other machines (a how Ableton, create a mapping)
The very least, and no update planned apparently, is that this is the first time I see a sequencer or can not use an odd number of step, that is 8, 16, 32 64 or worse and that's all! it cools me when I realized it and I wanted to go to the DSI Tempest.
For those who pilot via a DAW, no pb.
In the manual, it's almost perfect because I have not found a recent French ...
Otherwise, complete MIDI implementation in full.

The sounds are very distinctive, we can highlight the good things and it hits hard!
I used to make Deep Techno with both round kicks, powerful and also sorts of percussive fx is quite subtle and also happiness. If you want sounds more realistic for some cymbal or congas eg, it must be accompanied by a sampler (for me it is E4XT E-Mu and is the top)
It is also perfect for creating these sequences and drums kits on the fly, without stopping the playback, it goes fast and goes away. 2-position knobs are a feast for the roughing phase created more spontaneous and refine a 2nd time settings by pressing it.
Another strong point, you can create an in-house automation for the entire sequence or step. Ableton should take a leaf! on the other hand it does not transmit MIDI, what a pity ...
Level effects, I regret that we can not use them for separate outputs ... yet a strange design choice!
It takes time, like most instruments, but when it gets stuck for good and hard work comes a time when it grooves, it becomes musical and magical.

I use it for a few years. I suggest you at least MK2 MK1 because the power supply is rotten, I had too much bp and separate outputs are TRS on the second model.
Before I had the Waldorf RackAttack, not intended for real-time time but the synthesis and the sound was fantastic. Later, I would like to have the Tempest)
This is a very very good machine typed enough. There qq misunderstanding in design as its limitations in the sequencer and the inability to transfer the internal MIDI automation. Why are they useless effects for separate outputs??? (Which I have liked, either the number of 8)
I do not regret my choice. This is a great machine, one of the best without a doubt. It is reliable and very quick. When I get it all in my converter, is the only machine I have lower levels internally to avoid saturation!
See the source
Did you find this review helpful?yesno
Cookies help us improve performance, enhance user experience and deliver our services. By using our services, you agree to our use of cookies. Find out more.