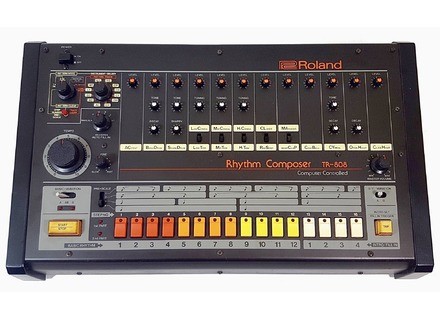 TR-808, Drum Machine from Roland in the TR series.

View other reviews for this product:
Each sound has its output spare.
to command, there is something SYNC, so I bought a converter to make it Get You Started sync with my tempo and Logic Audio.

I have two contacts on the sequences that do not work great, finally a go too, but m'inquite a bit. everything else, like large buttons, notched, it's solid!

The module squencage base is clear.
APRS, to measures other than 16 is divided is complicated a little, every time I have to go back to the doc, but it's not going to hell. Attention, not shuffle!

edition of the sound is great, as it is played the whole diffrence: tuner hand both the volume and release (not all sounds) to ring in the loop that runs best, ben is happiness from the world of the screen and mouse ... Cratif Trs.

the manual is very well.

I love the sounds!
t even if I just Drout to departure. The 808 seems a little more finesse play in the 909, and it's not really a big beat to program simple. In gnral elsewhere, I find the best programs for 808 (of "Sexual Healing" by Marvin Gaye to the first maximum of Underground Resistance) Programs are fairly sophisticated. It's worth it to take advantage of sounds "annexes" as the toms, the claps, maracas and other, they are all musical trs. I love HH. Possibly the weak point is the snare, which will never really work a basic rate of 2 and 4, it is too fine for a. The cymbal is not fantastic either. The kick can be standard on the other hand! [edit 2011] bah if it is very well this snare, and cymbal too. Just had to spend time with better connatre! [/ edit]


and then there's this thing that sounds vary from a sudden the other is the sheer magic of an analog world imperfect, and has supported the loops, it's fantastic! Trs diffrent banks of 808 samples, compltes as they are, until I used the ...

I use it for a year. I do not have that choice would do, simply because it took the argus 400 euros in one year, which is compltement amazing. Meanwhile, I keep mine.

The +: dchirent sounds, it's too alive, and it must be trs cratif for ringing.
The -: ben it's aging hardware with spices spare I imagine more and more rare, even in rparateurs ... I take a trs care, I took him on scne once, but I do not do it again.

Now, I would not be against a 909 too. But I find it shameful surct must arrter l.
See the source
Did you find this review helpful?yesno
Cookies help us improve performance, enhance user experience and deliver our services. By using our services, you agree to our use of cookies. Find out more.