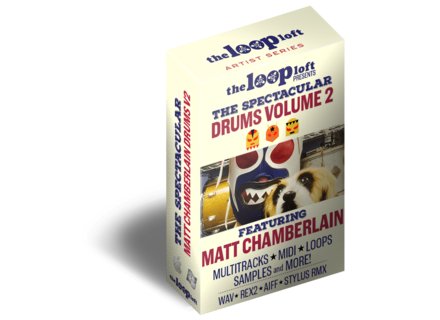 The Loop Loft has released volume two of their Matt Chamberlain Drums series, a multiformat sample and loop collection.

As announced earlier this year, The Loop Loft has recorded a new volume with session drummer Matt Chamberlain at the Sound City complex. The result is a total 10 complete sessions featuring grooves ranging from indie rock, to backbeats, to tribal tom beats and many things in between, with even more sessions and samples than the first volume.

All stereo drum loops are available in either WAV, REX2, AIFF (Apple Loops) & Stylus RMX (or you can choose a bundle including them all for barely more money than a single format). In addition, each format includes MIDI versions of every audio loop as well as samples of all 5 drum kits used during the session, giving you total control over both the grooves and sounds in the library.

Additionally, the Deluxe Version provides up to 17 channels of separate audio tracks, allowing you to mix every element of Chamberlain’s drum kits including kick, snare, toms, overheads and several room mics, all 24-bit/96kHz quality.