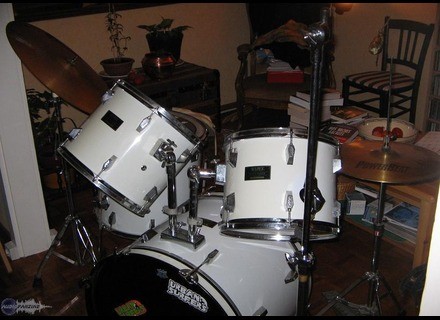 Value For Money : Correct Audience: Anyone
View other reviews for this product:
Being drumming since 1992 and had a few kits in that time (First was a Maxwin 5pce from the 70's RIP), But by the early 2000's when that kit was no longer up to the punishment of metal drumming (Death/Grind) I needed a new kit on a budget.
Went to the local drum shop in Melbourne (Aus) Drummers Paradise, to see what $1000 would buy me. (June 2003)
At the time i knew Mapex were around a while and seen some drummers play them and they sounded good, and top drummers were starting to use them.
Mapex Venus Series rock size kit was there (Black of course!) for $999 so i thought why not try it. I mainly play Tama since 2006, but this kit holds up quite well for value, sound, quality & durability.
Of course i change skins after a couple of months of beating them to death (I'm a heavy hitter) to Remo's and now Evan's (Best!). I normal tune low & dead for metal, Bass drum fat & punchy, doomy toms & cracking mid-range snare.
And it sound great, although i admit the snare is not the greatest and hated it at first, taking a few years to get it right instead of a few minutes. The kick pedal was very standard, but since i use double kick pedals it rarely got used.
Since getting the Tama kit, it's been primarily use for live gigs in rock covers, grind/thrash/death metal bands, as the Tama is the stay home setup in the bedroom kit (Too big to travel). Hi-hat & cymbal stands are fine. All in bags too.
I recently brought a second kick drum as well as a 8" & 10" tom to make a big 8pce metal live kit out of it.
Due for a good clean & new skins and she be good again.
Think it was meant to be a Beginners/Advanced kit, I was at the advance state by year 2000 so it was a good step up. But i guess it be fine for most people.
Keeping this kit for a very long time now I've expanded it!
Make great for 1st kit. Enjoy!
Did you find this review helpful?yesno
Cookies help us improve performance, enhance user experience and deliver our services. By using our services, you agree to our use of cookies. Find out more.