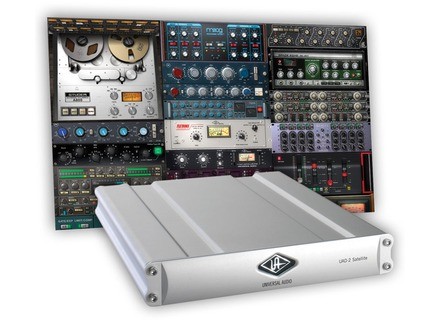 Launching at NAMM 2011, the UAD-2 Satellite is described as Universal Audio's answer to the request for a Firewire-based UAD Card. No longer must a customer have PCIe slots or an ExpressCard port to be able to use UAD, now anyone with a Firewire 400 or 800 port will be able to bring the family of UAD plugins to their productions, wherever they go.

The UAD-2 Satellite is a metal enclosure containing either the power of a UAD Duo or UAD Quad card inside. Sporting an illuminated UA logo on the front, the UAD-2 Satellite is powered with an included adapter and provides either FW400 and FW800 connectivity. Full PCIe-equivalent performance is available via FW800, with FW400 provided for flexibility with a trade-off made in available bandwidth.

Initially UAD-2 Satellite will support Mac only; PC development is underway and will come as a free update when complete. UAD-2 Satellite will share a FireWire port with an Audio Interface or Hard Drive, again for a trade-off in bandwidth. For more information visit the Universal Audio site, linked below.

For all details, FAQs and latest release information on the UAD-2 Satellite, visit UA’s website.