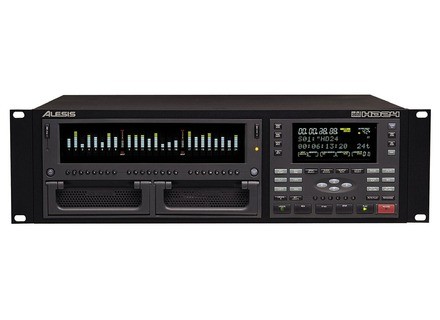 View other reviews for this product:
Connectivity complte, damage missing the Elco analog, and no SMPTE. Just the MTC. Too bad also that tlcommande "MRC" announces the release of the device has never been established.
As against two hard drives in the same machine, it is a idegniale (back up fast). Please note that all hard drives do not work well. Maxtor show often (the drive is not recognized, while vosu have recorded over the day, good day anxiety!). Seagate and Fujitsu are not a problem. Specially also: when you said your tracks on your favorite software (with the Fire that anyone with HD24 port MUST buy if he wants to make the edition), and you bring the tracks, the locators are DCAL 1. The zero-are over, the first one becomes available. Boring as we have not understood. A bug that the download of the update has not rsolu.

Easy, simple, easy ... Everything that had a recorder in hand will be fluent in 2 minutes. For others, the user manual is rdig (in French, on the site tlchargeable Alesis)

Honntes converters. I use 2 years external converters (who rate more expensive than the recorder) and is even better. But considering the price, we could not expect miracles. Overall, satisfactory offer. Otherwise, this machine is a rve: never plant it (not like those of ndd &@**$&#"" ordis)

I am one of the first purchasing a HD 24 in Belgium when it was released. Several CDs have t raliss with him, I do not regret my purchase at all, except that the price has really dropped between lemo output and now it's annoying when tjs a achte device that has just been released. But I do not regret this purchase, which I use every week in a professional setting.
See the source
Did you find this review helpful?yesno
Cookies help us improve performance, enhance user experience and deliver our services. By using our services, you agree to our use of cookies. Find out more.