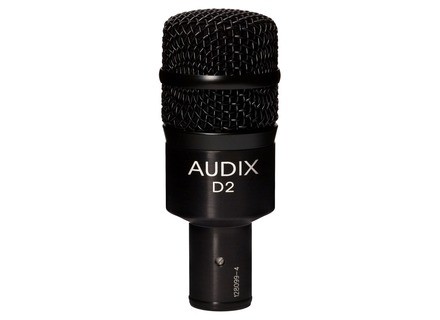 Buy this productView price information >
View other reviews for this product:
The Audix D2 is another one of the microphones from Audix's percussion line. It is an instrument microphone, designed for use on tom drums, and congas. Audix claims that the microphone lacks the muddiness of many drum microphones, but continues with claiming that the D2 manages to retain the warmth that one would want from these particular percussion instruments. Toms and congas are very meaty drums, and a drum microphone that retains this sound is very important.

The Audix D2 contains, like many microphones from Audix, a very low mass diaphragm, improving its transient response, naturally something that many dynamic microphones struggle with. The microphone is hypercardioid, and boasts an ability to handle whopping SPLs of 144 dB. It can also isolate "each instrument's 'sweet spot.'" It has a frequency response from 80 Hz to 18,000 Hz.

The D2 is also a very small microphone, measuring at under 4 inches and weighing just over a quarter of a pound. With toms and congas, this is important, as many microphones do have the tendency to get in the way and get hit by the drummer. Generally, drums microphones are also made very durable for this reason, and although the D2 stays out of the way, it can take a bit of punishment if it needs to.

In use, I have found that the Audix D2 microphones are very useful on toms and congas that just need that extra warmth. However, it does in fact manage to avoid that muddy frequency bloating that can happen with less expensive microphones. They are also relatively inexpensive, so they are, in this humble reviewer's opinion, quite a steal. This is actually a microphone that I can, for its value, recommend without any hesitation to almost any drummer out there. If the warmth becomes too overwhelming (which it won't because this warmth is almost unquantifiable, but very sweet sounding) then it isn't hard to turn it down.
Did you find this review helpful?yesno
Cookies help us improve performance, enhance user experience and deliver our services. By using our services, you agree to our use of cookies. Find out more.