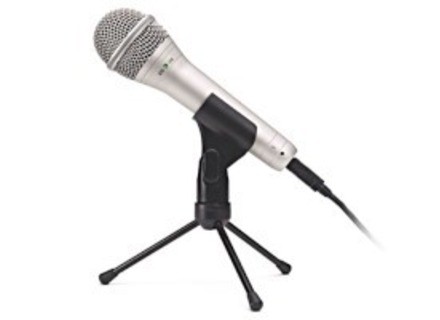 
3 user reviews
Find it in the classifieds starting at $40 Avg used price: $40

View other reviews for this product:
This is a computer mic that I used at work for a while to record voice instructions for new employees. It is a very simple and basic microphone but it does have some nice features that make it very attractive to those on a budget who need to get something for podcasting or basic recording. First of all the price is the best feature on this mic. It is less than $70 for a microphone, connector cord, and analog to digital interface all in one. Not to mention it comes with a tripod desk stand and recording software by Cakewalk. The value is just unbelievable. About the mic, it is a dynamic microphone so it is not as sensitive as the condenser mics that a lot of people are using now. You need to get up closer to the grille on this mic than you do with a condenser before you can really hear some detail on what you are recording. Also if you get so close that you're almost touching the mic, you get extra bass in the recording which is cool and makes you sound like you're the guy doing movie trailer voice overs - very cool. It has a super cardioid pickup pattern too which means that it rejects things to the side and rear of the microphone a lot, so make sure you are right in front of the mic when you are recording or you will be drowned out. The mic automatically converts the signal to digital and then sends out the signal to your computer with a USB cable that plugs right into the mic, so you don't need an audio interface.

The value here is pretty much second to none for someone who wants a basic all purpose computer recording solution. That's why my company bought them for basic voice recording for tutorials. The software alone probably sells for more than this mic. It's a great package at a great price, even though the sound quality on the microphone is not incredibly professional.
Did you find this review helpful?yesno
Cookies help us improve performance, enhance user experience and deliver our services. By using our services, you agree to our use of cookies. Find out more.