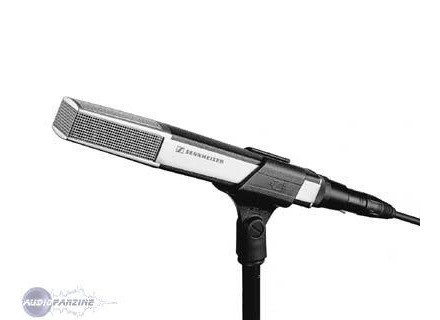 MD 441-U, Dynamic Microphone from Sennheiser in the MD 441 series.

Value For Money : Excellent
Buy this productView price information >
View other reviews for this product:
Dynamic microphone type super-high-end built to last. Realization of unquestionable professional quality allows it since its creation to be part of all the microphones parks, in the studio or on stage. With its low-cut filter to 5 positions and its anti-snoring reel uptake is optimal and has preamplifier an excellent quality signal.
Like all the microphones he has his own stomping ground of decision that will saxophone harmonica through voices, guitar amps jazz metal. The MD 441 is unavoidable where all others have failed microphones, for me, it's like this ...

I bought an MD 441, which was also my first microphone, with my first salary in 1971, when it was released. Both say that it encouraged me to develop my taste for sound recording given its features. Two years later, I had 4 good that kept their place in my park alongside my new acquisitions, Neumann U67, KM 84 and Schoeps. At the time, his output jack was a screw-pin DIN 3, which was better in my opinion an XLR he was fitted thereafter, because it took less force to plug and unplug the cable because this microphone, although well designed, is generally more fragile than Shure, the tank of the sound system ... Its aluminum grille does not like the batsmen except for taking the stamp in the snare or striking the skin brushes for drummers less edgy .. The fragility of the clip as his only flaw in my opinion. I solved the problem by taping it to remain on the body.

What I like most: Successfully taken where all other microphones have failed ...
What I like least: The fragility of its attachment clip and its connection system, connect and disconnect with care because over time it can take the game

Versatile but not universal ... Its output level is quite low and it should load it with a preamp worthy of him to get the maximum, which is not the case for most sound cards and low cost consoles Today, real stews in this area, and even the other way ...

I find the price / quality ratio very good despite the relatively high cost of this beautiful object. This is the only way Sennheiser found to preserve the quality of its products and resist, for the moment, the systematic practice of planned obsolescence. Let's use as there is still time! ..
See the source
Did you find this review helpful?yesno
Cookies help us improve performance, enhance user experience and deliver our services. By using our services, you agree to our use of cookies. Find out more.