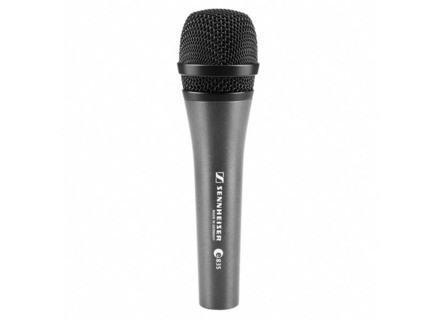 e 835, Dynamic Microphone from Sennheiser in the evolution 800 series.

This is mic intended mainly for live vocal use and touring. A lot of pros seem to like them. They are cheap and well made. Basically Senn's version of the SM58.

My band has used this mic on tour extensively. Everyone in the band sings so we have 3. They are very balanced sound wise, which is a blessing and a curse. I have a high range, so I come through the mix quite well with very little EQ necessary. Sometimes a little push in the low mids helps but it depends on the venue. My bass player has a deep voice, so the engineer usually has to use the low cut extensively to prevent boom and keep him from sounding undefined. The only time these can really be left un-eq'ed in with a female vocalist. They almost never get pitchy in the high end like some mics do. We used to have a female singer with a high voice and we had to cut her high end out with almost every mic she used. When she used this one we were able to leave it flat. They do have a tendency to boom with male voices however.

The basic goal of the 835 as I see it is to cut out some of the upper mids to prevent feeback where it occurs. For a female vocalist this does work well. However, to get a male voice to sound intelligible you have to boost the mids at the board, causing the mic for feedback a lot quicker. In other words, Sennheiser has sacrificed its mic's ability to mix well in order to prevent feedback. This isn't as big a problem as it sounds though. Just an observation really.

I like the shape of the mic. It isn't rounded like a 58 so you can get closer to the base of it. That's great. I would recommend this mic for live vocal use especially for females. If you have a deep voice it will require some EQ. And be prepared to deal with possible feedback from the increased mids. It really is a great sounding mic for the price though. Well worth it.
Did you find this review helpful?yesno
Cookies help us improve performance, enhance user experience and deliver our services. By using our services, you agree to our use of cookies. Find out more.