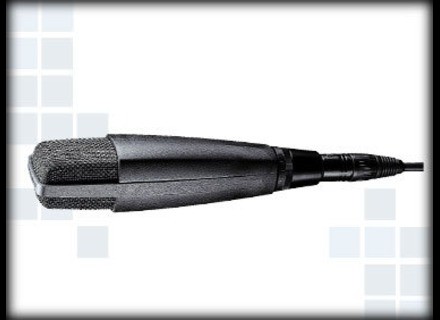 MD 421, Dynamic Microphone from Sennheiser in the MD 421 series.

« A dynamic microphone that could record a space launch without overloading. »

View other reviews for this product:
VERY high maximum SPL (or, if you will, little sensitivity, rated at 2mV/Pa +-3dB), dynamic and cardioid shaped (don't be fooled by it's condenser-ish disguise, the mic's front is it's topmost end!). This mic is a staple on most studio locker's around the world. You can throw them on unnecessarily loud rock amps and they will hands-down handle it, put them on toms and you'll get a classic sound with good rejection from the rest of the drums, just remember, this ain't no jazzy and delicate mic.

It has a not so obvious bass roll-off switch intended to reduce the proximity effect, labeled from "M" (which I presume is for "music", or flat response) to "S", which I suppose means "Speech", or full roll-off starting @ 500Hz.

It is also very well built, mine was bought used and has no dents or obvious scratches at all.

I love it on bass cabinets, specially since I've been recording stoner/doom stuff that is just amazingly fuzzed up and somewhat loud (remember though that loud amps = great sound is a myth). I also like it on toms, depending on how the drummer hits the kit and the genre. If it's really loud and rock-ish I'll put the 421's without thinking twice.

They're also inexpensive, maybe not 57 cheap but still a pretty good deal. My only complaint is the retarded design on the clamp that just seems to be made by the devil himself so you drop the mic over and over again.