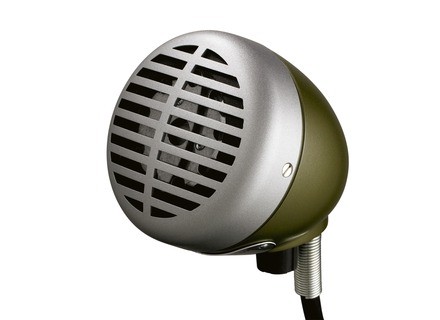 520DX, Dynamic Microphone from Shure in the Classic series.

Buy this productView price information >
View other reviews for this product:
Harmonica microphone designed to be plugged into an amp.
It has a knob to adjust the gain.

How long have you been using?
Since 2005, I did a lot of concerts with this microphone. I had to do to fix 2008 as the membrane was broken (must say it was dropped a bunch of times).

Did you try many other models before buying it?
No, it was the only one available, I liked so I made the dark!

What is so special that you like most and least?
The gain knob is very convenient to mute the microphone when you do not play, also its setting changes the sound quite well. Attention on the other hand, it is placed in such a way that the key sometimes playing: it takes a little practice.

You should know that micro strong colors the sound it is intended to play blues typed: if you want a harmonica to his period Dylan Freewheelin 'is not what it should and easily share in feedback.

FYI, mine has also been used to record the song for a voice very saturated: it worked pretty well. To give an idea of ​​the record, I have seen in the documentary "It might get loud" Jack White was using this one for a piece of the Raconteurs.

How do you rate the quality / price?
Pretty good, if I had to repair mine, it is because of the abuse he suffered. Since it works again like the first day.

With experience, you do again this choice?
Yes, given my level fairly average harmonica, it is well suited to her that I seek.
See the source
Did you find this review helpful?yesno
Cookies help us improve performance, enhance user experience and deliver our services. By using our services, you agree to our use of cookies. Find out more.