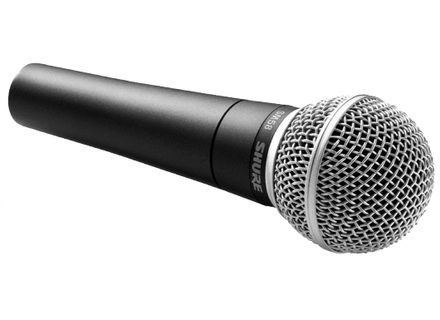 The 58 is sort of like the 57 with a different front as most people have argued. They both seem to have the same type of sound, that is with enhanced presence and upper midrange and not much low end. These are good for vocals and increases the presence through the mix for most people. I've used the 58 like a 57 for experiments and have found that it doesn't quite suit the job as a 57 would and is definitely geared more for straight forward vocals.

Compared to the 57 there are slight differences, the 57 actually seems to have a bit more low end overall while the 58 is a bit cleaner and clearer in general. The 58 has become the worldwide industry standard microphone that you'll see on every stage from small to stadium-sized. It's a decent sounding mic and relatively well priced. There have been many variations made of this microphone with slight EQ tweaks and what not but in my opinion for a dynamic vocal mic it really doesn't take much in terms of a mic to get some good sounds if you start with the SM58.

For live use, I'd say these are the SM58 vocal mics and SM57 mics are the ones to be looking at, for recording purposes they are decent but if you can spend a bit on decent condenser mics you may be better off. I've personally stopped recording with dynamic mics for most situations (minus drums) but for live it's almost absolutely necessary as most stages aren't totally capable of handling condenser mics in a good manner.