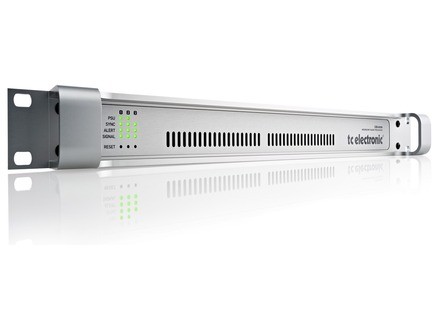 TC Electronic will add in april the DB6 model to their broadcast loudness processor series.

The DB6 can process up to 3 simultaneous SD/HD/3G streams and features two 5.1 processing engines per SDI stream, each one can operate with different audio formats (AAC, Dolby, Ogg Vorbis, Lossless or Linear).

The DB 6 processor ships with a software suite that includes the LoudnessWizard algorithm, which will be used for loudness correction and stereo to surround or surround to stereo conversion. The multichannel TC Delay feature is also included for use live or for lip-sync with a look ahead function. The suite also includes the LM6 Loudness Radar Meter which displays audio loudness data with several options (momentary, history, true peak, program or range) and features a statistics log.

The DB6 is compliant with the major international industry standards, including ITU BS.1770-3, ATSC A/85, EBU R128, ARIB TR-B32, OP-59, etc. It ships with presets designed for these standards.

The processor is available in two Single and Multi versions. The first can handle one single SD/HD/3G stream, while the second can receive two additional "Transmission 3G" cards in order to process up to 3 streams. Each Transmission 3G card features two multichannel processors and can operate with two LM6 Loudness Radar Meters and two Loudness Wizard simultaneously. Both versions have the same 19" 1U rack form factor.

No information about the price of the DB6. You'll find more details at www.tcelectronic.com/db6/.