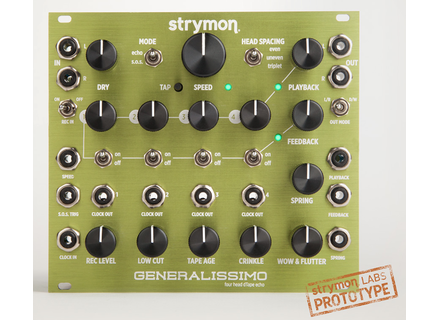 Strymon has presented the prototype of the Generalissimo, a 28HP five-in-one Eurorack module.

According to Strymon, not only does Generalissimo allow you to create an abundance of warm, gooey, and saturated tape soundscapes, it also provides a huge amount of utility and versatility, giving you the functions of five separate modules in one:

Generalissimo’s Speed knob is said to be calibrated in a very musical and playable way so that it’s easy to hit octaves when adjusting the pitch, allowing to play with delays like a proper instrument. The Tap button sets the delay time, effectively determining the tempo by setting the tape head distance. The Tap control is entirely independent of the Speed setting, and this independence is key to the impact Generalissimo will have on the overall sound and user's creativity.

Users can also use use control voltage to control the Speed, Playback level, Feedback amount, and Reverb level. The dry path is also completely analog, avoiding any conversion-related noise or latency.

However, this is only a prototype with features being likely to change between now and the commercial release (planned for the Summer 2016) of the final product, which retail price is planned at $599. More details at strymon.net.