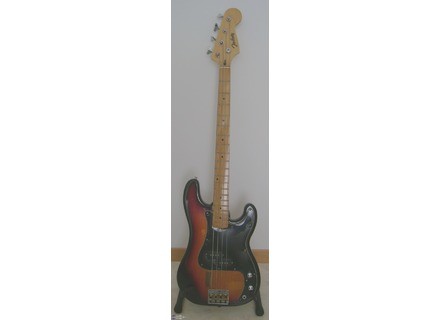 Low Asia (China or something like that).
It's a bass that has more than 15 years (the first Harley and Jim is saying something ...)
This is a copy of the famous but no less famous Fender Precision Bass.
Channel Precision type but with less features. Varnish, maple fingerboard and Fender head still typed.

The bridge looks like something I've never seen on another bass. A kind of easel format strat low (the strings are through) but this improves still no sound ...

The pickups are very low quality.

In total this has a low but acceptable mechanical violin to be reviewed (at least for this series). They all farted one by one. Before it was not mechanical but Fender type s oil bath mechanical base and the gear often farted. (When school is in the mid 90s and the Internet does not exist, the lifts are expensive and we only have eyes for crying at the store that sold it to you that worry queue secondhand because otherwise it's 450 balls (65 euros!) Set of 4 ...)

Otherwise, its level, it is necessarily the appointment when it's your first bass but with time, we must admit that in fact it was not really that.

Channel a bit steep but it's finally a pleasure when you play on another bass. Access to acute: see Fender, the scale is the same ... Access is correct as on the real ...

Bass stings a little head. The tuners are a ton but it compensates with the strap.

Its level, on the other hand should not expect or even the Fender Squier. It is not at all go ... The tone is just for show. It's not change much because the sound is soft and flat.

I just plug it into any amp, it sounds enough in the bass. The report can only improve if you have a good amp and still connected even on an Ampeg SVT-VR is still not the top.

See above, the definition of microphones is not good, sound too flat and not deep, no body ... In short, a fiasco.

This bass has been historically played a 30W amp brand "Matrix" at first then a Peavey KB100 home (combo keyboard), it was also connected to my other amps that followed, although it had already been replaced by my Ibanez (HH 100B, Hartke HA3500 and Ampeg SVT-VR) without convincing results.

This bass is no longer used. I keep it just because it has great sentimental value. I cut my teeth on it and I can not see without them. Today I have the true accuracy (model 62) and it's weird having to compare them. The choice is quickly made at least in terms of sound and violin.

I bought it because I was a fan of Steve Harris at the time and accuracy as he plays, the choice was simple. I could choose between a coffee shop in the brand Storm I think that was a copy of this bass or Musicman Stingray. Given my passion for the bass player of Maiden, I decided.

If I had to make the election again?? But probably because I dig Squier made some very good products for just a little more expensive (if I had known then!)

In short, I love this bass for what it brought me and gave but not for what it sounds ... Nostalgia when you take us!
See the source
Did you find this review helpful?yesno
Cookies help us improve performance, enhance user experience and deliver our services. By using our services, you agree to our use of cookies. Find out more.