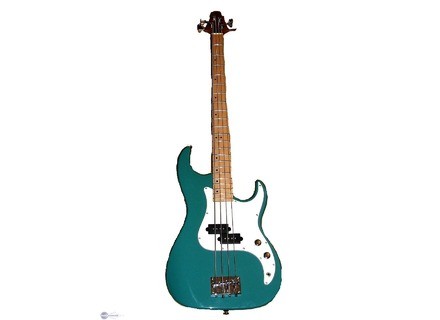 I was only little by the time (2003 or 2004 ...?), I was just looking for a bass my personal hacks (I'm playing guitar).
From the store, I found the original sound terrible, but I took it anyway because I had not the means for others.
It was confirmed over the years: in my songs, the bass was almost never his place: his hollow, poorly defined, no heat and no real presence and a big lack of attack. A little better through a small pedal for bass (digitech RP80), but hey, the sound is not modeled on his bass and worse it does not save any ...

Things have already improved significantly when I lined the cavity to foil pickups.
I recovered with a low background noise reduced by 80%. Not negligible ...

Lately I've ridden over the kit EMG P-Bass who needs no introduction, and it is day and night. There are the attack, roundness and warmth, and my bass lines are finally bringing their key to my songs. I would have had to change the pickups years ago!

As stated above, the original sounds disposable (at least on mine ...)
Strongly agree not to attempt a comparison with a MusicMan ...!

With the EMG-P kit, it sounds everywhere, in an amp in a pedal in a table ...
Without changing the pickups, you can not do much without an amp simulator and / or a good amp behind ...

Initially, let's be honest it's still a real low entry level, a single copy of PB pourrave with microphones and no shield for the electronics, but with a nice round (thank you greg bennet).

But ultimately, with € 100 investment in micro and application of good old trick to cheap, I'm happy with the bass is also quite light and offers a good grip.
See the source
Did you find this review helpful?yesno
Cookies help us improve performance, enhance user experience and deliver our services. By using our services, you agree to our use of cookies. Find out more.