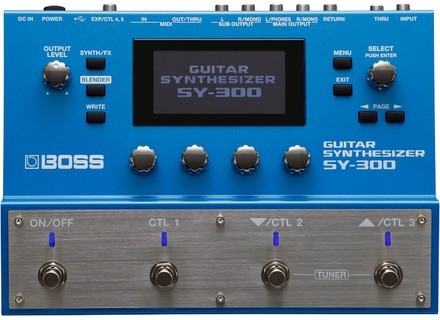 A review of the Boss SY-300 guitar synthesizer

In the past, trying to find a guitar synth that tracked accurately was akin to searching for the Holy Grail. No product, whether it was a guitar synth or MIDI guitar controller was able to accurately reproduce guitar playing down to its nuances. Heck, most couldn’t even handle a string bend very well. But Boss has changed all that with the SY-300, a synthesizer that is triggered by a guitar (or other instrument’s) incoming audio signal, no special pickup required. It’s a revolutionary idea, and from a tracking standpoint it succeeds brilliantly.

Before going into details on the performance and sound of the unit, let me first describe it. The SY-300 has a blue metal casing and is built like a tank. It's designed like a stompbox, but at about 10” wide and 7.5” deep, it’s bigger. Its controls consist of four foot switches, six knobs, and seven buttons, as well as a backlit LCD display.

On the rear panel you’ll find eight 1/4” jacks: One input, one audio thru, one footswitch input for an expression or control pedal, and four outputs (Main L&R and Sub L&R). Also on the back is a USB port that lets you connect the unit to a computer, a power input, and MIDI in and OUT jacks. Don’t get too excited about those, they don’t pass MIDI note information, just program and control data from a connected device. A ground lift switch is also included.

The SY-300 is a versatile unit from a connectivity standpoint. It can plug into a amplifier like a regular stompbox, or it can connect to a computer via USB and function as an audio interface, so you can record directly from the unit into your computer. You have to download a driver first, but it’s easy to find on the Boss website, and installation is a snap, I tested it on a Mac, but the driver is available for both Mac and Windows.

Inside the SY-300 is a three-oscillator, programmable “analog-style” polyphonic synthesizer as well as a 4-way effects processor. You can program the synth directly from the SY-300’s front panel. The Select knob, which is also a pushbutton, lets you choose an oscillator or effect to edit, and navigate to different screens. The four knobs under the LCD are used to change values.

It’s pretty easy to figure out how to use the interface, but because it has so many editable parameters, you often have to wade through several layers of menus when editing. An Exit button lets you back out of a page to the next level up. The graphics are kind of cheesy by today’s standards, but they are effective in helping with navigation.

If you have a computer, however, there’s a better way. If you download the free Boss Tone Studio for SY-300 software, you can edit the unit on your computer screen, which is a lot easier (more on that later).

Back to the synth architecture, you can choose from a variety of waveform types for each of the three oscillators, including Sine, Saw, Tri (Triangle), Square, PWM, Detune Saw, Noise and Input, which sends your actual guitar signal through.

The Filter/Amplitude section is the next stage in the signal chain. It offers editable low-pass, high-pass, band-pass and peaking filters. There is an Amp Env Attack (Amplitude Envelope Attack) parameter, but for the life of me, I couldn’t get it to become active. And that brings up my first problem with this unit: The documentation is woefully incomplete. The manual for the hardware unit is not what I would call comprehensive. The Boss Tone Studio for SY-300 software, appears to have no manual whatsoever. I searched the Boss site and the web for it to no avail.

In any case, the next stage is the LFO section, featuring six different choices including sine, saw up, triangle, square, random and S&H (sample and hold) for each oscillator, all with a series of adjustable parameters.

After that is the Seq (sequence) section, where you can create up to a 16-step pitch sequence, with each step adjustable up or down by 24 semitones. It can add a lot of motion to sustained notes, and is pretty cool.

In this example, I programmed a sequence and just played four quarter notes in a row, letting the last one sustain so you can hear more of the sequence.

This example uses the Layer function stack guitar, bass and flute together.

The Control/EXP parameter lets you assign parameters or effects to one of the three Control footswitches on the unit, making it easy to turn them on or off as you’re playing. By default, the Control 2 and 3 switches let you step down and up, respectively, through the patches. For live use, being able to change patches and turn on and off parameters or effects with your feet is very handy.

The effects section is quite powerful in the SY-300, which is not surprising given Boss’s expertise in the area of digital effects. The unit has four individual effects processors, each with a number of editable parameters, and you have a lot of routing possibilities from the oscillator section into the effects. You can route all the oscillators through all the effects, or have some skip certain effects. The routing function is fairly complex, and not really covered in the manual. Some of it is intuitive, but not all. In any case, it gives you a lot of sonic possibilities. The effects themselves are integral to the sound of the SY-300.

Each effects processor can be set to one of 21 different effects, which is a pretty impressive number. These include Chorus, Flanger, Phaser; Delay, Reverb, EQ, Compressor, Limiter, Lo-Fi, Slo-Gear, Overdrive/Distortion, Slicer, T. Wah, Tremolo, Uni-V, Pan, and Isolator. Also in the list are some combination effects: Chorus + Reverb, Chorus + Delay and Delay + Reverb.

All the effects are quite good. One of my favorites was the Slicer, which lets you chop up your sound into one of 20 different patterns. Here's an example:

If you ask me, the Boss sound designers went a bit overboard assigning effects to the various patches, especially with the ambience effects. This patch is called Motion Filter, and is overly reverbed for my taste.

The Boss Tone Studio for SY-300 software functions as an editor, librarian, and a portal to Boss’s cloud-based patch repository, Tone Central.

By virtue of the size of a computer screen compared to the size of the SY-300's LCD display, and the quality of the computer’s graphics compared to those in unit, editing from the Tone Studio application is faster and easier. It’s well laid out and easy to get around in. You can even move effects around in the signal chain via drag and drop.

The librarian function of Tone Studio can be used to import banks of patches from Tone Central, where you find a number of collections of sounds created by musicians such as Alex Hutchings and Tamas Barbaras, among others. The librarian lets you drag and drop sounds to reorder them, and create “LiveSets” of patches in a particular order for gigging. You can also save patches to disk and import them back in at a later date.

There are two big takeaways for me from my time using the SY-300. First, the tracking is amazing. Whatever you play, it tracks exactly. Bends, pull-offs, hammer-ons, you name it. It even tracked my whammy bar moves, as you'll hear in this example:

Never before have I played a guitar synth that tracked this well. What’s more, you don’t need a special pickup. Just plug your guitar in.

But, of course, since it’s guitar synth, it’s got to have a downside, right? Sure enough, it does. The SY-300’s Achilles Heal is its sound generation, which doesn't offter that much variety, and disappointing overall. Yes, it’s a 3-oscillator “analog style,” synth, but the sounds it produces are for the most part mediocre, and certainly not warm like those from an analog synth. I can’t exactly put my finger on why, but they just don’t sound that “synth-y” in many cases. Many sound like an electric guitar with a lot of effects on it, which may be because lots of patches utilize the Input mode on the oscillator, which brings the actual guitar sound in through one of the oscillators' signal path instead of a synth waveform.

At first I thought that my disappointment in the sounds was just a function of the Boss presets being badly programmed (as factory presets often are), but even the third party sounds that are available through Tone Central aren’t significantly better, although as a whole they are an improvement. I’ve come to the conclusion that the SY-300 just has a limited sonic palette. I don’t know why that is — you would think a 3-oscillator synth would be able to produce a lot more sound variation. What’s more, I wish Boss could have incorporated some sort of sample-based or wavetable synthesis in the SY-300’s engine so that it could produce emulative instrument sounds. For me, at least, a lot of the appeal of a guitar synth is that I want to be able to play the sounds of other instruments, not just spacey or buzzy synth sounds.

I will say that I liked the sounds better when I played through an amp than when I used the direct through the SY-300’s USB interface. Perhaps that’s where they’re best suited.

I actually found that I got the most unusual sounds when I plugged something other than a guitar or bass into it. For example, here’s an electric violin.

I also tried it with a lap steel, and found that I was able to create some very cool sounds.

By the way, both the violin and the lap steel both tracked very well.

So you can hear some more of the sounds, here are a few more examples.

The SY-300 does a good job on distorted guitar sounds. Here's a patch called Word of Mouth, which uses the Input setting (which passes the guitar sound through) on all three oscillators.

Here's a bass guitar going through the SY-300, which is set to one of the Tone Central patches called Bassasaurus 4.

Finally, here's another one that utilizes the Sequencer section.

The SY-300 ($699) is a revolutionary product — the first synth guitar that tracks accurately. Kudos to Boss for that. It’s a technological breakthrough. Because that part of it works so well, I was let down by its lackluster sonic capabilities. That said, you look at it as a unique multi-effects unit for guitar that allows you to mix in some synth textures, you’ll love it. It would certainly be a very cool addition to a pedalboard for live playing, although its $699 price might preclude that for many. But if your expectations are for guitar synth that lets you compete sonically with keyboard players, I have the feeling you’ll be disappointed.