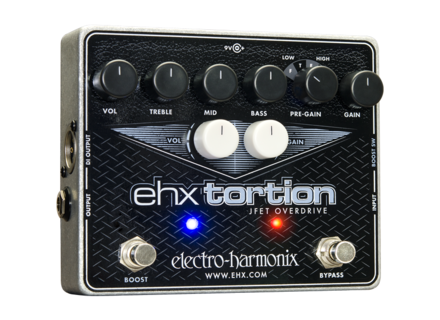 Since the days of the original Big Muff Pi, Electro-Harmonix has been building distortion pedals, and one of its latest entries is the EHX Tortion ($179). Way more than just a distortion effect, it also offers a range of overdrive sounds, pleasing clean tones, a boost channel, and you even get amp simulation via its direct out.

The EHX Tortion’s circuitry is based around JFET transistors, but Electro-Harmonix has engineered the pedal in such a way that it sounds more like a tube preamp. It warms up your tone on virtually any of its settings. The unit comes with a 9V power supply, but can also be powered with a 9V battery. 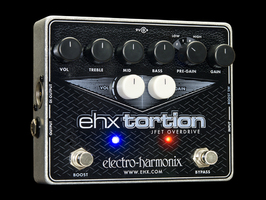 The pedal features two modes: Normal and Boost. The former has black-colored knobs for Volume, Treble, Mid, Bass, Pre-Gain (a 4-way selector switch) and Gain. The Boost channel has two white knobs: Volume and Gain. Two footswitches are included: Bypass, which switches between on and buffered bypass, and Boost, for kicking in the Boost stage. There’s also a jack for a standard momentary footswitch (not included) that offers another way to switch on and off Boost mode.

The Pre-Gain selector offers two basic gain types: “Plexi”-style and “hot-rodded,” with the latter offering a more modern sound than the former. In each category are Full and Tight options. Full offers a bassy tone, and Tight has less bottom, and is intended to sound more “modern.”

When in Normal mode, you dial in a tone setting and a preamp type, and depending on where you set the Gain control. you can go from clean to moderately high-gain sounds. Turning on the  Boost mode adds an additional gain stage that can push your sound into overdrive. Depending on where you set the Gain knob for the Boost channel, you can either add a bit of additional crunch or a whole lot of distortion. Having the dual modes makes it easy to set both a rhythm and a lead sound, and switch between them with your foot, which is great for live performance.

Direct deposit in your DAW

On the left side of the pedal is not only a 1/4” output, but an XLR DI output that offers amp simulation. So you can use EHX Tortion as a recording front end, and get some pretty sweet tones. I found the cabinet sim to be more convincing on the cleaner tones than the distorted ones, where it didn’t have quite as much “air” as when the pedal was miked through an amp.

Here is a recording with both the rhythm and lead parts recorded through the DI output into Pro Tools. All of the examples were recorded using my ESP 400 Series Strat-style guitar, equipped with Fender Lace Sensor pickups.

To really get a sense for the “tubey-ness” of the pedal, I recorded the rest of these examples through a solid state Orange Crush LDX practice amp (which features a 10” speaker). I miked it close with a Shure SM57. Let’s start with a clean sound. I set the gain down to 0.

In this example, I downtuned my guitar a half step, and used one of the “hot-rodded” preamp settings for a metal-style rhythm sound, with the Boost activated and gain about 3/4.

This one has the same preamp setting, but with a lot more gain including the Boost stage.

Here’s a somewhat more restrained, although still pretty hot setting, with the Boost off and the Normal gain up to max.

Finally, this example features a classic-rock style Plexi sound, with the Preamp in first position.

After using the pedal both for recording and rehearsing, I’m sold on the EHX Tortion. I love that it provides a range of overdrive and distortion tones that all have a warm, tubey sheen to them.  I tried it through a couple of different solid state amps, and it made them both sound like they had tubes inside, and when played through a tube amp – my Fender Twin — it was even fatter. Having the DI amp simulator built in is a nice plus, and makes the pedal handy for the studio, too.

Post a comment 2 comments
Buy this product
View price information >
Viewers of this article also read...
Cookies help us improve performance, enhance user experience and deliver our services. By using our services, you agree to our use of cookies. Find out more.