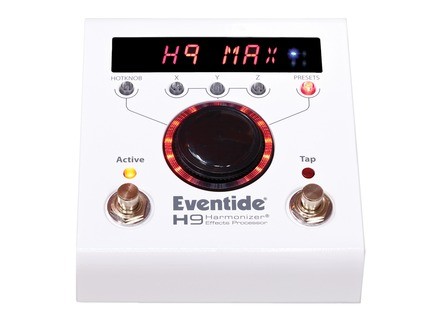 H9 Max, Multi-Effects for Electric Guitar from Eventide in the H9 series.

Value For Money : Excellent Audience: Advanced Users
Buy this productView price information >
OVERALL IMPRESSION:
The H9 Max is not an inexpensive piece of gear at $699 USD, but the quality of technology and number of sounds is staggering for this stereo in and stereo out stomp-box (including full MIDI capabilities, built-in tuner and 9v 500mA power supply). If you were to purchase individual Eventide pieces that make up the H9 Max, the cost would be far greater and your pedalboard a lot more congested. If you were to purchase individual pedals from other manufacturers that provide various delays, reverbs, phasers, flangers, choruses, tremolos, vibratos, wahs, etc., you still would not be ahead of the game financially, and the quality of Eventide sounds would be hard to beat.

Overall, the H9 Max is one of those investments that will pay off long-term and a stomp-box that you will refer to regularly, whether you want a simple echo or a deep-space reverb – ideal for rock to ambient and anything between. There are three caveats to the H9 Max. First, there are so many categories of sounds and so many sounds that the unit could be overwhelming for some; however, that is the beauty of this unit, viz., you have a ton of stuff from which to choose and you pick what you want and create your patches accordingly. Think of it as 100 tubes of paint and you get to select what colors you want for your composition. Second, the hardware is not overly complicated to use, but there are a number of button and switch pushing required for editing; however, the included software makes choosing a category (e.g., reverb) easy, as well as any sub-category (e.g., plate) – you then can scroll through and test out the reverb plate types, find what you like and then tweak it with graphic knobs that emulate an actual pedal’s set of controls. It’s like having dozens of reverb plate pedals (for example) that produce a different result and you pick, choose and edit to fit your taste. So far none of the above bothers me and the H9 Max is great fun to use and explore. Third, you are able to use only one algorithm at a time, which is the only downfall I have found with the H9 Max. For example, let’s say there’s a great phaser you like, and you want to add it to a cool delay or chorus that you also like on the H9 Max… you cannot do so. This means you need to have another delay or chorus (or another H9 Max, as Dave Weiner of the Steve Vai does) on your pedalboard in order to ‘stack’ effects. Many categories and effects do have a delay component, but you won’t be able to add a wah (for example) to a deep space type reverb.
SOUND:
Known for its classic, modern and stunning sounds that are so clear and apparent in quality, Eventide technology continues to remain an industry standard. The H9 Max (the next level up from Eventide’s well-known H9) is no exception, as it combines sounds from several of its award-winning stomp-boxes (Space, ModFactor, TimeFactor and PitchFactor), besides some H9 Max exclusives. Sounds range from very simple to utterly complex and beautiful, from a simple slap-back room reverb to floating endlessly in deep space… from a hint of fixed wah to a jet plane flanger swooshing overhead. There also are H910 and H949 pitch-shifting classics from the 80s and 90s to fatten up your tone and make it sound like there are multiple guitars playing. All combined you get the effects used by the greats and that enable you to sound closer to the likes of Steve Vai, Joe Satriani, Brian May and Jimmy Page. Many other companies offer such titillations, but Eventide’s H9 Max definitely competes for first place and sounds so fantastic – not just for the quality, but the available algorithms that you can tweak and save. The demo videos below cover all the various Delays, Reverbs, Modulations, PitchFactors and sounds that are exclusive to the H9 Max.


GENERAL USE:
The Editing Software (free for download) is the easiest way to choose, edit and save patches, accessed through a computer via a USB cable (not included) or via wireless Bluetooth with your phone or iPad. Navigation is easy… working through categories is easy… and making changes is easy (just like working with knobs and buttons on a regular pedal or piece of hardware). And if you have an Expression Pedal you can assign any of the controls (multiple controls as well) to the pedal and create even more diverse sounds and tones. You don’t need an Expression Pedal, but sounds like Q-Wah will have a fixed wah sound, rather than a dynamic wah sound. Below is the Overview demo, but in the Sound section you will find demos on each category (delay, reverb, modulation, pitchfactor and H9 Max exclusives). If controlling the H9 Max through its hardware, there is a ‘Hotknob’ that enables you to assign and determine the range of any element, and you can use the large Encoder/Switch (which turns or spins) to control dynamic changes, just like working with an expression pedal (changes made with the Hotknob also affect the Expression Pedal… they control the same parameters and should be considered one in the same). Overall, it took me about 40-minutes to learn how to edit, recall patches, etc., using the hardware controls, but only about 60-seconds once hooked up to the editing software. When using the H9 Max itself for editing, all the information is found in the LED window and there are LEDs all around the large Encoder/Switch to indicate the level of the element being changed (besides a numeric value in the LED Window). In terms of play or live use, the H9 Max is simple enough to use. First, be aware that you can create patch lists, although you can save 99 different patches. For example, suppose you need only 10 patches of various delays, modulations, etc., and that you scroll through those while jamming with friends or playing a gig. You can create and recall a patch list that locks the H9 Max into only those 10 patches, so that you don’t accidentally scroll beyond or get into other patches – thus making on-stage use less worrisome and better contained. Once the H9 Max is turned on, it starts off at the last patch when it was turned off. In order to access (scroll through) the patches you step on the Tap foot switch, which scrolls up to the next patch – you then press the other footswitch (Active) to select it. If you want to scroll down, step on the large Encoder/Switch to reverse directions, step on the Tap switch to find your patch followed by making the new patch Active. You also can access patches by pressing the Preset button and scrolling up and down via the spin knob on the large Encoder/Switch (patches load automatically in this mode). Pressing the Active switch at any time turns off/bypasses the H9 Max, and so you hear only the dry signal. Pressing both Active and Tap (while holding for a few seconds) brings up the highly sensitive and accurate Tuner. Holding down the Tap button for a few seconds gives access to Tap Tempo.

OTHER DETAILS:
A medium sized stomp-box, the H9 Max measures 133 mm (H) x 118mm (W) x 50mm (D) or (5.25 x 4.65 x 1.96 inches) and weighs 700g (1.53 lbs). The input impedance is 600K ohms (mono or stereo) and its output 470 ohms. The heavy duty chassis has a cream top over a black base. The five editing buttons and LED screen are low profile and far removed from the footswitches to withstand normal use and abuse. The large Encoder/Switch feels both solid and smooth during operation, also set lower than the two footswitches to prevent accidental pressing or foot-stomping. The two footswitches (Active and Tap) are soft switches, viz., no click when engaged or disengaged – there is no popping or significant signal noise when switching (except for the effect being cut off when the pedal is placed in bypass mode). All inputs (cable inputs/outputs, expression pedal, USB, MIDI and power input) are located in the back of the H9 Max to save on pedalboard space and to prevent possible damage from regular stomping use.